Tributes have poured in for composer Pho Duc Phuong who lost his battle with cancer on September 19 at the age of 76. 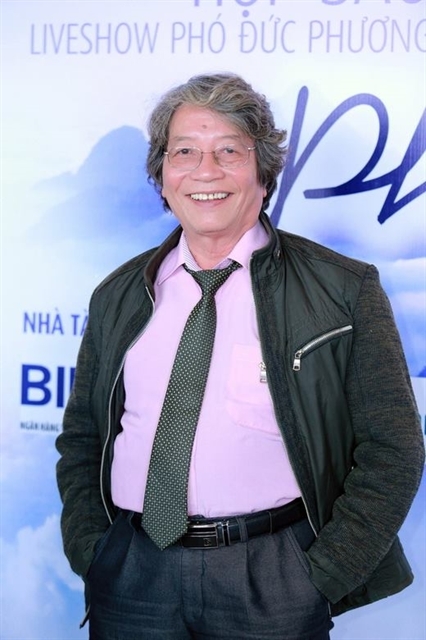 Though he was diagnosed with cancer in March this year, he was also very optimistic, always smiling and believed that he would overcome his illness.

His death came as a shock to those close to him as he had begun to show signs of recovery.

A live concert was held in July to honour his music and encourage him to beat the disease. The Khuc Hat Phieu Ly (Song of Drifting) concert is named after one of the composer's famous songs.

From his hospital bed, he still sent a voice message saying that he felt good. He thanked efforts of artists and the production crew and promised to return as he still has many uncompleted projects.

Phương was born in 1944 in the northern province of Hưng Yen. He’s widely recognised as one of the most important composers of Vietnamese music in the last 50 years. He was the founder and former director of the Vietnam Centre for Protection of Music Copyright where he struggled to protect the rights of Vietnamese composers.

Audiences enjoyed popular songs written since the 1960s such as Tren Dinh Phu Van (On the Top of ‘Cloud Summit’), Khong The Va Co The (Can’t and Can), Ve Que (Back to Homeland), Mot Thoang Tay Ho (A Glimpse of West Lake), Chay Di Song Oi(Let’s Flow, River) and Ho Tren Nui (Lake on Mountain). He was considered as a composer of northern rural area and Red River Delta. The northern folk singing has influenced distinctly on his creations.

“We can feel the love for the homeland in every single note. We respect him for the passion, contribution to the national music and desire to experiment with new things.”

His funeral will take place on September 24 at the National Funeral Hall, 5 Tran Thanh Tong Street.