Recent music activities like The Veston Concert held by singer Ha Anh Tuan have demonstrated how local tourism preferences have changed in the resort city of Da Lat in the Central Highlands. 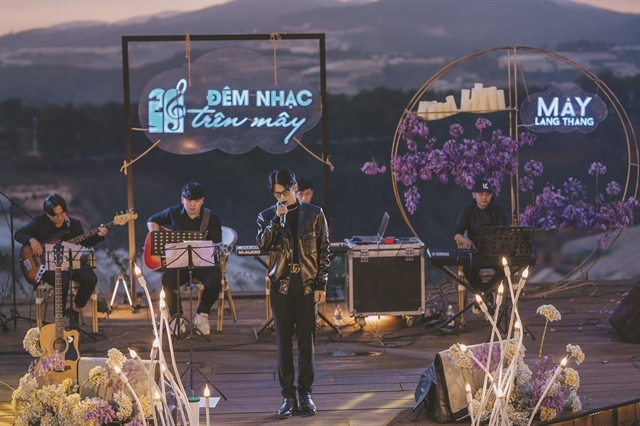 “Music tourism”, defined as a visit to a city or town to see a performance, has become more and more popular in Vietnam.

Celebrated singer Tuan recently hosted a two-day concert, called The Veston, at the Da Lat Teachers College, after being postponed twice because of the COVID-19 pandemic.

Unlike shows organised in big cities such as HCM City and Hà Nội where most concertgoers live, Tuan’s shows in Hội An and Da Lat required music lovers to travel, which could add to expenses.

Lan Anh, 27, a resident in HCM City’s District 2, said that she had attended three Tuan’s concerts so far. “Everything was awesome! I really appreciate how Tuấn is very passionate about his music. I can easily picture all the lyrics and emotions that Tuan puts into his songs."

The Veston Concert offered several tiers of tickets, with the most expensive seats costing VNĐ4.2 million (US$180) and the least VNĐ900,000. On top of that, out-of-town concertgoers have to spend more on transportation and accommodation for at least a two-day stay in Da Lat.

“Surprisingly, I did not think much about spending up to VNĐ8 million per person for this kind of activity as I told myself this was a little getaway in combination with good music on the weekend,” she said.

Anh Khang, 29, another HCM City resident, and also a concertgoer in Da Lat, said that it had been a long time since he and his girlfriend were able to “breathe fresh air”.

“Even though I am more than happy to support local tourism, having travelled in Việt Nam for more than a year, I started to feel bored as most places offer similar activities and vibe,” he said, adding that the music element had made Da Lat feel different.

A typical day in the Central Highlands resort city for a tourist could include activities like hunting clouds, enjoying local cuisine, visiting cafes with natural themes, and chilling by the lakes. However, a trip can be even more memorable listening to a concert or mini-live shows until the late hours.

Compared to the beach where electronic music is preferred, music lovers agree that Da Lat is more soulful and romantic, making it a perfect place for “lost souls”.

In fact, many singers have performed in Da Lat at mini-shows to meet locals’ increasing demand for quality and chill music.

“The hustle and bustle of city life, especially after the COVID-19 outbreak, has often burned me out. A weekend in Da Lat with music that speaks to my mind is like a 'pat on my shoulder', telling me everything will be okay tomorrow when I go back to work,” Khang said.

The pandemic over the last year has put producers and performers in a bind, making it difficult to organise shows, which has reduced revenue. Even so, many of them have still produced shows since it is a must for artists to come up with singles, albums or performances on a regular basis.

Smaller shows have become an optimal solution that balances the need of locals to experience quality music and the need of artists to maintain their fans’ interest and reduce investment losses.

The smaller shows are working well with all artists, including experienced ones who love to reconnect with their audiences, and younger performers who need to introduce their vocal ability and latest music pieces to a broader audience.

Many singers agree that the mini-shows' open yet private spaces are very special. They feel more connected to the audience, compared to shows at a stadium. And it's safer to organise small shows during the pandemic.

Da Lat, in fact, has hosted mini live shows at cafes, pubs and lounges for many years now. But music tourism is thriving now as more cafe owners have installed stages in open spaces and held shows during sunset.

As multiple music activities are scheduled weekly, visitors have many choices.

Lululola Coffee+, May Lang Thang and Thông Ơi are popular places to visit. They all have spectacular views of the mountains and natural surroundings. To make a booking, one just needs to send a message to the spots’ fanpage or hotline.

In addition to weekly mini-shows at coffee shops, a special performance to honour musician Nguyen Anh 9 took place at the Da Lat Opera House in Lam Vien Square on April 17.

This was the first time that the late musician’s music night was held in Da Lat. The show marked the first performance held at the new Da Lat Opera House, which opened last December.

The gymnast was informed about his qualification on Thursday night.

The Then Kin Pang festival is held annually on the 9th and 10th days of the third lunar month, when thousands of people from Vietnam and overseas flock to Khong Lao commune in Phong Tho district, Lai Chau province in celebration.

Vietnam men’s futsal team is to join playoffs together with Thailand, Lebanon and Iraq, to determine the final two slots for Asia at the FIFA Futsal World Cup Lithuania 2021.

While cinemas are facing problems attracting audiences due to the impact of COVID-19, TV series have started to dominate, with the return of many well-known actors and with a large number of viewers sitting down in front of their TV screens.