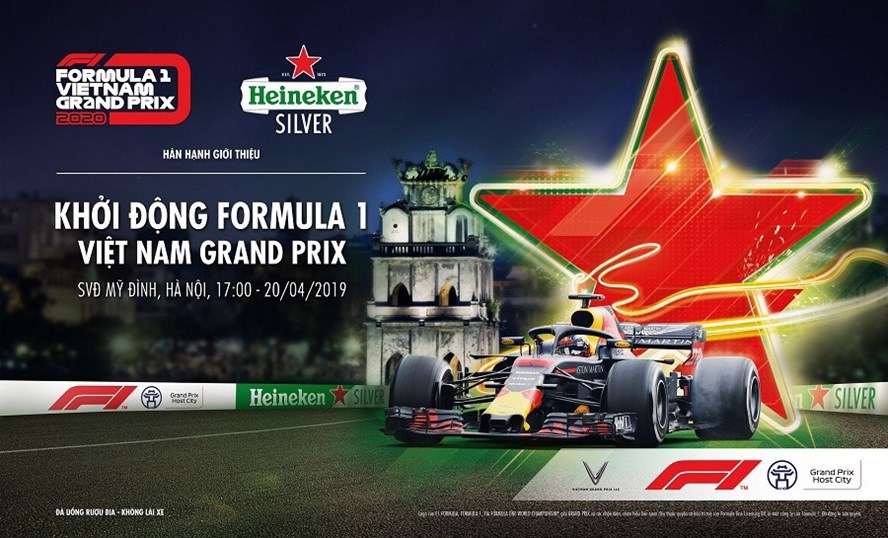 F1 cars and famous driver David Coulthard and members of the Aston Martin Red Bull Racing Team will make an appearance at the event. Coulthard has 13 grand prix wins and finished on the podium on 62 occasions.

The 2020 ticket sales mechanism and other promotional activities will also be announced and introduced at the event.

Nguyen Viet Quang, general director of VinGroup said, "The kick-off event is the first in a series of activities that will be held this year to promote the F1 Vietnam Grand Prix in 2020. The F1 will help promote Vietnam to the world and a good start to heat up the atmosphere in Vietnam for sports events from now to 2030."

Leo Evers, CEO of Heineken Vietnam, said it was an honour to work with Hanoi authorities and Vietnam Grand Prix to bring the race closer to thousands of Vietnamese fans. Heineken is the exclusive Global Beer Partner of Formula 1.

Having performed in countries such as Russia, Poland, Germany, Norway, Italy, the UK and the US, critically-acclaimed pianist Nguyen Bich Tra has been described as “sophisticated and unique” (Rheinpfalz Zeitung)

Installation of art in public places in Vietnam is essential to the development of smart cities and their cultural life, Ho Chi Minh City’s artists and cultural experts have said.

The Unseen River directed by Pham Ngoc Lan will be internationally premiered at the Pardi di domani shorts competition of the Locarno Film Festival which will be held from August 5-15.

Truong Quan Tinh, who has 40 years of experience in making lacquerware, is worried about the decline of Tuong Binh Hiep Village in Thu Dau Mot City in the southern province of Binh Duong.