The film, Vinaman, will feature challenges and secrets about a superman who fights evil and protects justice.

Its first poster was released on Van’s Facebook page last week, attracting many likes and comments from film critics and fans.

Van and her studio, Studio68, are working on casting the film.

“The world has Superman, IronMan and SpiderMan. How about us? I wanted to capture a Vietnamese superhero named Vinaman, who has a Vietnamese spirit and character, in my new film,” Van wrote on her Facebook page.

Her film is based on real stories in Vietnam during the COVID-19 pandemic. “I saw many doctors and volunteers in the fight against the virus. I don’t think a superman should be the strongest. I believe he should be a person who makes the biggest sacrifice,” she wrote.

Nguyen Thi Kim Chi, a 10th-grade student from HCM City, said: “Van has a lot of experience in the industry. She performed in Hollywood films and has worked with talented Vietnamese and foreign film directors. Her film, Vinaman, will be the best work of its kind on superman in Vietnam."

Van began her movie career in 2004 with a leading role in Rouge, a 13-part TV series produced by international channel MTV Asia, after spending years in music and on the catwalk.

Van has performed in several films and TV shows before becoming a director and producer. Her first movie as a producer was the comedy film Ngay Nay Ngay Nay (Once Upon A Time), a co-production between the artist and her partner, Canadian-Vietnamese director Cuong Ngo, in 2015.

One year later, she directed her first film, Tam Cam-Chuyen Chua Ke (Tam Cam-The Untold Story), a fantasy work based on a fairy tale known as the Vietnamese version of Cinderella. She invested more than 20 billion VND (nearly 900,000 USD) in filming. 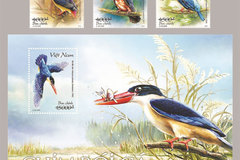