Still sharp at 95 years of age, he recalled the exciting days of his youth with great fondness.

Born into a family with a literary tradition, Tran Bang left home when he was 20 to join the war as a member of a team of Cheo (a form of musical theatre traditionally performed by peasants in northern Vietnam). 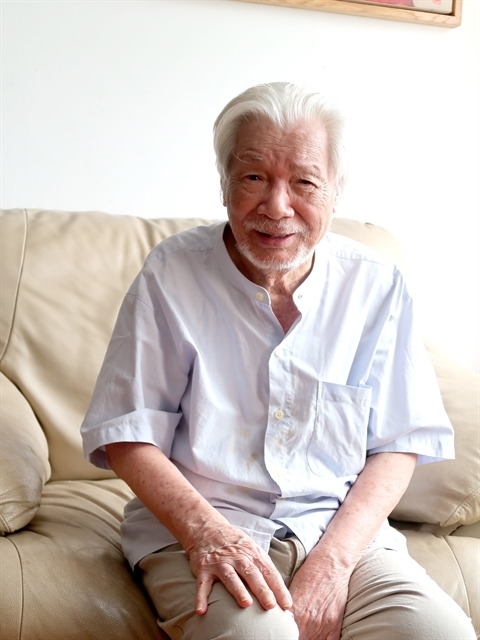 Trained in the Han Chinese script, he’s also fluent in French, German, English, and Russian. Having penned many dramas with storylines taken from the tragic yet victorious Dien Bien Phu battle over the French in 1954, he feels his education has been put to good use.

“I was just over 20 years of age,” he recalled. “We travelled all the time, performing in different places each night along dirt roads in Yen Bai Province and other places in the resistance region. We mainly performed for volunteer supplies transporters, road builders and truck drivers on their way to the front, as well as wounded soldiers returning to the rear.”

“After a year in the jungle, I had caught malaria and was so weak I could barely carry my own backpack including rice ration. We used to sleep wherever we could. It was terrible to sleep in the open air in the forest during winter.”

The old actor’s eyes light up at the memories.

“Mai Khanh, Thai Vy, and I trained others and also performed,” he says. “I was the leader of the group, while Thai Vy was in charge of choreography and song writing, and Mai Khanh composed and sang both traditional and contemporary songs. I knew theatre and folk music, so we could do many different things.”

“We performed every night. We also taught rural people how to dance and sing, and organised festivals with non-professional teams. We wrote scripts and were the actors as well.”

Memories of the war of resistance and his youth come rushing back.

“The best people to perform in front of were the food supply teams, because there were so many people,” he remembers.

“Every time we performed for the drivers, it was at night. As team leader, I was allowed to sit in the cabin with the driver. There was one time when our vehicle was on a perilous, winding road with mountains on one side and a precipice on the other, but the driver just kept singing while others kept sleeping.”

“I met thousands of young volunteers, from Thanh Hoa, Thai Binh, and Nam Dinh provinces, as well as ethnic minority people from the northwestern mountains. We sang and danced to brighten up their days. I still remember one time we carried sacks of rice to a ferry station on Road 6. It was a dark, muddy, and wet time deep in the jungle, but we had fun and we were fighting.”

Fall and rise of Cheo

“Hanoi was unimaginably miserable from famine in 1945 under the French and Japanese rule,” Tran Bang goes on.

“Carts loaded with dead people went along the streets every day. I still remember the sight of unburied bodies scorched by the sun. Dogs dragged around some of the corpses. In the countryside many hungry people deserted their villages. The famine resulted in the Cheo teams in the villages falling apart. The popular theatre was almost wiped out.”

The Central People’s Ensemble was established, gathering together famous actors and actresses, to entertain people in the resistance zone.

In the spring of 1953, at Tan Trao in Tuyen Quang Province, north of Hanoi, Tran Bang wrote his first Cheo script and worked with artists Nam Ngu and Diu Huong to set up a performance of Sister Tram, the first modern Cheo play. President Ho Chí Minh and other party and state leaders were at the premiere.

“I was fortunate to make the first successful Cheo play that was praised by President Ho Chí Minh,” Bang said.

“It was more by accident than by design, because I knew little of Cheo. President Ho liked it simply because the singing was so beautiful, but back then no one bothered to produce Cheo plays. My seniors at that time told me that the traditional musical theatre is a national treasure and that I should devote my career to preserve it.”

As part of preparations, Bang and his colleagues sought out a group of Cheo master singers to become a core in reviving the art form.

“It took a lot of effort,” Bang says. “There was one master singer who had sworn she would never sing Cheo again because her life was so miserable. But sing she did. Recording her was hard, meticulous work. We had to hand-carry a bulky generator along a damaged road to where she had evacuated to, in Bac Giang Province, but place it away from where we were recording so it wouldn’t drown out her singing. Touched by our appreciation of Cheo, she agreed to join our team.

“It was simply wonderful to watch the group perform excerpts from ancient Cheo plays they had learned by heart. I just loved it. How could I not love it? I was to immerse myself in the traditional theatre for a lifetime because I loved it so deeply.”

In 1957, Bang and some other veteran actors established a research committee to study and preserve ancient Cheo plays.

He has since rebuilt the stage for the folk art genre. Thirty years on, when he presented a Vietnamese traditional musical play to an international theatre festival in East Germany in 1984, it was warmly received.

“I was later honoured with the Ho Chí Minh Award by the Vietnamese Government,” he continues.

“President Ho had encouraged me to live my life with Cheo," Bang recalls. "After watching Sister Tram, he invited me to lunch the next afternoon. There were only four of us -- the President, army heroine Nguyen Thị Chien, a doctor who had just returned from France whose name escapes me, and myself. President Ho told me ‘you are so young, but you love traditional art. Try to learn from the artisans and retain the art of Cheo.’ And so I did, and I let the President know I did. It all felt predestined.”

Tran Bang’s view is perfectly clear -- Cheo needs to be revived and improved upon.

In 1984 he took a solo of a Cheo jester to the Berlin international theatre festival.

“We were so proud,” he remembers fondly. “In a modern theatre, illuminated by 400 lights, the Vietnamese folk actor performed in front of an international audience for the first time.”

“In ancient Cheo plays,” he explains, “no woman ever played Thi Mau, the flirtatious daughter of a rich family who was wrongfully accused of having a sexual relationship with Thi Kinh, who was actually a woman disguised as a monk. All of the actors were men. To dress up as a woman, all the actor did was cover his head with a scarf. But those actors were so talented that many in the audience were none the wiser.”

“I chose Bach Tuyet, a young artist taught by the best of the elderly master actors, to play Thi Mau. We were helped by painters Sy Ngoc, Quang Phong, and others, who had graduated from the Indochina Fine Arts School, who created the outfits. We also selected the best excerpts from ancient Cheo plays to include in this new version. It’s good that Cheo has been modernised, but it’s not as soulful as in the old days.”

The first time, in 1957, it took on the theme of class struggle. The second time it presented an image of a tearful woman unjustly miserable.

And in the third, the stage was decorated with a huge Vietnamese brass burner, a pair of white horses, and an orchestra, as in ancient Cheo. The character of Thi Kinh was given a humanistic touch. Unjustly ostracised by the community, she nonetheless persisted in bringing up Thi Mau’s abandoned child.

With attainment to Buddhahood later in life, Lady Thi Kinh is the embodiment of compassion, love, endurance through adversity, and charity -- qualities continued by the Vietnamese people.

Singer Hoang Thuy Linh made history by winning four awards including Singer of the Year at the 15th Devotion Musical Awards. She talks to Minh Thu behind the curtain.