Some fans of comic book characters have posters on their walls. Others wear branded T-shirts, while the more extreme have even been known to have superhero tattoos.

He loves the DC comic book hero Batman so much he built a perfect replica of the “caped crusader’s” Batmobile in the garage of his Hanoi home. 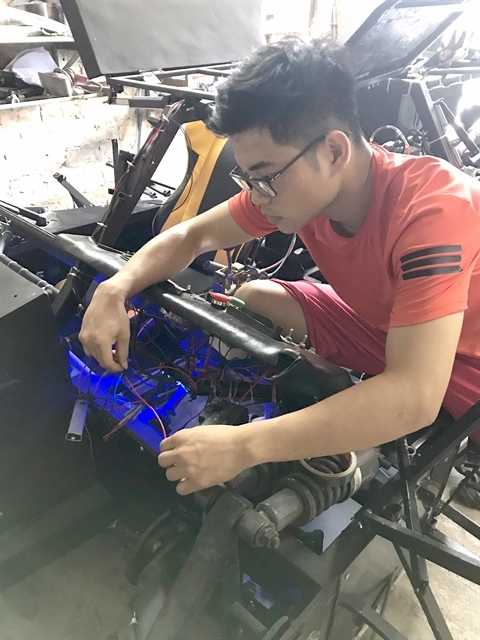 “It took me three years to prepare,” said 22-year-old Chung, a student at the Hanoi University of Architecture.

“My inspiration came from the Batman movie and I really love the character. After watching The Dark Knight, I was impressed by the Batmobile Tumbler.”

“After a while working in costume design, I started to like Batman and his cool gadgets more and more.”

“It was then that I came up with the idea of building the Batmobile,” he said.

“I made it with the desire to have something to remember about my youth, so that when I am old I have a story to tell.”

But this isn’t a project he just threw together. It’s taken Chung almost a year to complete and it was by no means cheap.

He also designs cosplay costumes and used the money he made to fund the Batmobile.

“I have spent more than VND500 million on the car, which I saved from making cosplay outfits,” he said.

“I didn’t have a lot of money when I started out, so every time I made a little bit from the outfits it went into the car.

“After 10 months of construction, the Batmobile is 90 per cent completed and I’m still trying to perfect it.”

The body is completely handmade and the car is powered by a 400cc two stroke engine, with a steering wheel designed in the shape of the Batman logo.

Chung built the car in the garage of his home in the capital’s Thanh Trì District.

“The hardest part was finding tyres, because this type can’t be found in Việt Nam. I had to order them from abroad,” he said.

“I’m impressed by the body, because it’s entirely hand-made, from the shaping to the use of composite resin as reinforcement. The exhaust has a design similar to the one in the movie, but in fact is taken from another vehicle.

“My goal was just to make the car run like any other car, not to be so fast, because it can’t go on the streets anyway. When I drove it for the first time, it really did feel like sitting in a Batmobile.”

Chung revealed: “My friend didn’t believe me when I first mentioned it and thought it would be impossible to build. I told him that everyone just needed to help me, and that we had to start working to know if it could be done or not.

“The car has helped me become more confident and believe that everything is possible, just do your best to achieve our goals, like how Batman creates belief in people about leading a good life.”

In the movies, the Batmobile Tumbler is equipped with machine guns, a rocket launcher, explosive mines, and armour plating.

Thankfully these optional extras have not been fitted to Chung’s car, though sometimes in heavy Hanoi traffic they could come in handy.

Chung joked: “After making this, I sometimes imagine the Tumbler crashing through other cars or anything that stands in my way.”

That’s one way to beat the rush hour traffic!

The fortune of an "antique king"