A hat-trick from captain Nguyen Van Quyet and goals from Nguyen Quang Hai and Nguyen Thanh Chung secured a place in the final for the capital side.

Despite the big win, Hanoi wasn’t the stronger side during the first half as City had more shots and possession.

It could have been one-nil for the visitors if it hadn’t been for Hanoi goalkeeper Tan Truong’s good save after a shot from Tran Phi Son in the 22nd minute.

Hanoi's first dangerous opportunity came in the 31st minute and while Le Tan Tai’s chip beat the onrushing Bui Tien Dung, the ball sailed wide, much to the goalkeeper's relief.

The first goal came just before half-time as Quang Hai’s chipped free-kick put Van Quyet through on goal to beat Tien Dung's flap at the ball to open the scoring.

The lead was doubled early in the second period, Quang Hai's free-kick assisting Thanh Chung this time for a headed goal.

The visitors hit back two minutes later thanks to a clinical finish from Do Van Thuan.

Any hope was to be fleeting however, as in the 63rd minute Quang Hai restored the two-goal lead with a smart finish from a Thanh Chung cross.

Quang Hai’s excellent performance continued and after a mistake from HCM City’s defender Ngo Viet Phu, Do Hung Dung won possession and passed the ball to Quang Hai who then crossed quickly to Van Quyet to make the score 4-1.

The route was completed in the 91st minute as Pape Omar Faye raced clear of the defence and squared for Van Quyet, allowing the captain complete his hat-trick with an easy tap-in.

There will be a Hanoi derby in the final of the National Cup as defender Bui Tien Dung’s goal in injury time helped Viettel beat Than Quang Ninh 2-1 in the other semi-final. VNS 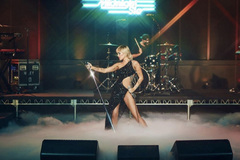 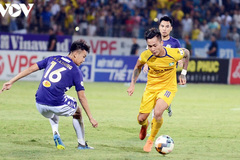