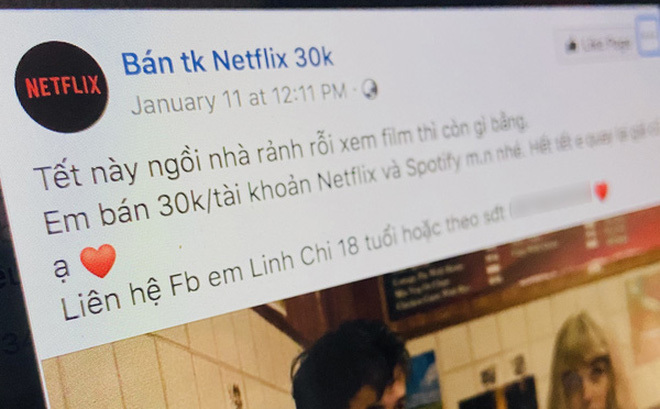 After one month of using the service for free, Netlix would begin charging a monthly fee. Subscribers can cancel the subscriptions at any time during the free trial.

However, the program has been stopped in Vietnam. Users will have to pay fee immediately from the day they begin using the service.

No official explanation about the reasons behind the decision have been released. However, some analysts assume that the service provider had to stop the program as it has been exploited by Vietnamese to seek profit.

On social networks and forums, one can easily find ads on selling Netflix accounts that allow free access to Netflix at very low prices of VND20,000-50,000.

The price level is much lower than the monthly subscription fee of VND260,000 for Ultra HD service package set by Netflix. Many people buy the Netflix accounts to continue using Netflix service for free, rather than becoming official service users.

Why are these Netflix accounts so cheap? The account sellers exploited Netflix’s free-trial policy, used virtual payment cards, including stolen cards to register for trial use and sold the accounts to other people.

A card can be used to register for one free-trial Netflix account. Accounts can be shared among four users. As such, sellers can make a profit of VND100,000 for every account.

As the free-trial time lasts one month only and many accounts use invalid card information, many cheap Netflix accounts ‘die’ after a short time of use.

In this case, Netflix account sellers have to give ‘warranty’ service to users by compensating with other accounts. However, in fact, many sellers deny their responsibility and sellers lose their money.

With the decision by Netflix to stop the free-trial program, the problem will be settled.

Netflix wants to produce its program in Vietnam, for Vietnamese people

Netflix, the world’s leading internet entertainment service, has announced that members in Vietnam can now enjoy the service in Vietnamese.