A new photo exhibition opened on Saturday in Hà Nội, revealing pictures of the country's fight against the COVID-19 pandemic.

The exhibition includes photos from the book Tinh Than Viet Va Cuoc Chien Chong Dai Dich COVID-19 (Vietnamese Spirit and the Fight Against COVID-19), by veteran photographer Nguyen A. 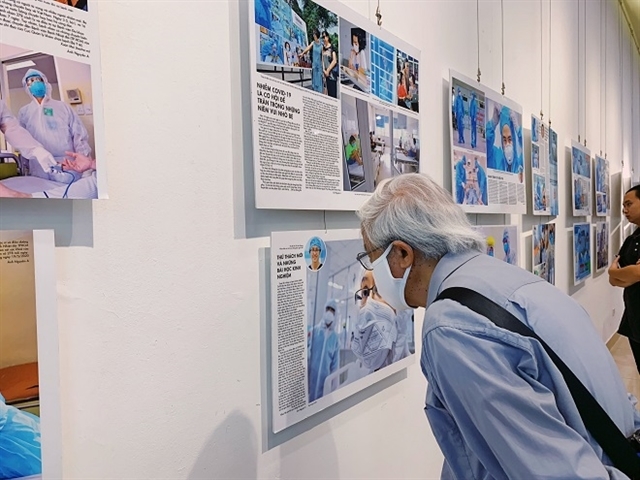 Published by the Vietnam News Agency Publishing House, the book is an overview of Vietnamese people in all walks during the pandemic.

Highlighted photos revolve around the work and sacrifices of doctors and their staff at hospitals in Hanoi, HCM City and Quang Nam Province, who worked and made sacrifices to save COVID-19 patients. In the 360-page book, A also reflected other forces like young volunteers, police and soldiers during the outbreak.

Images of Government leaders, such as Prime Minister Nguyen Xuan Phuc and Deputy Prime Minister Vu Duc Dam, who is also the head of National Steering Committee for COVID-19 Prevention and Control, are featured.

Á is one among few photographers who were allowed to approach the British pilot – Vietnam's 91st COVID-19 patient, who received attention from world media.

Many untold stories and unseen photos relating to him are revealed at the exhibition. However, photographer A wanted to highlight the doctors and nurses who took care of him.

“While local and international press agencies wanted to print news and images of him but were refused, I was so lucky to have a chance to visit him three times,” said A.

“Firstly, he didn’t allow me to approach and take photos, but I told him that I just want to capture the work of doctors and nurses of Cho Ray Hospital, including Dr Tran Thanh Linh, deputy head of the Intensive Care Unit.”

Linh is good at English and was in direct contact with patient No 91. During two months at Cho Ray Hospital, Linh was the closest medical worker to the British pilot. The patient trusted him, so Linh was the only one who was able to convince the patient to let A come in and take photos.

Á understood why patient No 91 didn’t want to be photographed. In this photo collection, he wants to highlight the medical staff of Cho Ray Hospital as this case was so special.

“The ultimate goal of this book is to highlight the human affection and solidarity among people,” said A.

“The Party and State’s guidance, the initiative of rice ATMs and numerous charitable activities nationwide and from abroad are testament to the great affection.”

“The friendship between VIetnam and the world was clearly emphasised through the fact that many foreign patients have been treated well and recovered. The doctors, silent heroes of the anti-pandemic struggle, are the very special inspiration in this situation.”

“Through what they have done, I love this life more and since then I live more meaningfully, cherishing the surrounding emotions. We all have to respect and bow before their silent devotion. They gave me endless inspiration to compile the book.”

"It was created in rare circumstances, mentioning urgent issues but not lacking in artistry. It’s a result of thousands of photos A took throughout the country.”

“These photos can send humanitarian messages and strong views to encourage the community to be in this together and be stronger to beat the virus,” he said.

“During my 19-day treatment at the National Hospital for Tropical Diseases, I learned to honour every single joy in life, re-establishing the habit of reading, watching marching ants and exercising with other roommates,” said Hang.

“As we were not allowed to go out of the room, whenever doctors sent us for check-ups like X-rays, we happily called it a chance to hang out. At night, we turned off the light and silently enjoyed the moonlight outside the window. Such simple things can be significant joys.”