Thai Son Nam failed to meet their goal of a final berth at the Asian Football Confederation Futsal Club Championship yesterday in Thailand.

The last year’s finalists from Vietnam were defeated 1-3 by three-time winner Nagoya Oceans of Japan in the semi-finals at Bangkok Arena.

It was a rematch and a chance for redemption after the Japanese club lost 2-3 in the quarter-finals last year.

Things were different this time, with Nagoya Oceans quickly taking charge of the game and piling on the pressure. Attempts from Tomoki Yoshikawa and Luis Gabriel Washington, nicknamed Pepita, could not beat Thai Son Nam goalkeeper Ho Van Y.

Ton That Phi nearly open the scoring for the Vietnamese side a minute later but his shot on target from inside the area was denied by Nagoya Oceans goalkeeper Yushi Sekiguchi.

Pepita, who had scored five goals in the tournament already, made no mistake when another chance fell his way in the fifth minute.

The Brazilian received a pass from Yoshikawa in a fast-paced counterattack and his close-range finish was unstoppable.

It was 2-0 for Nagoya Oceans in the 16th minute after Pepita netted his seventh goal with finish to the far post.

The Japanese side played defensive to start the second half, but Nguyen Manh Dung still managed to narrow the gap in the 26th minute. He pounced on the rebound after Sekiguchi blocked a cross by Phi effort and slotted it home.

Thai Son Nam then suffered a big blow when Pham Duc Hoa received his second yellow card and was sent off in the 33rd minute.

Playing with only five men, Thai Son Nam failed to maintain their momentum. They conceded the third when Shota Hoshi's shot from the left side hit defender Tran Van Vũ and deflected into the net a minute after Hoa’s sending off.

“We played a hard match in the quarter-finals and have not recovered totally for this game,” said captain Vu. "It is a difficult and we have tried our best." 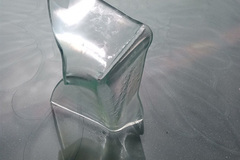