The Tu Linh (Four Holy Beasts) Boat Race in the spring in Ly Son Island District, in the central province of Quang Ngai, has existed and been preserved for more than 300 years.

The festival, which is a folk cultural feature imbued with the traditional identities of people on the island, aims to pay homage to natives’ ancestors who formed the island and soldiers who have fought for the country’s sovereignty over the Hoang Sa (Paracel) and Truong Sa (Spratly) archipelagoes. The event is also an opportunity for the local people to pray for prosperity, peace and smooth voyages for the fishermen.

From Sa Ky seaport (Quang Ngai Province), it takes about one hour for visitors to get to Dao Lon (Big Island) in Ly Son. In recent years, this place has become an attractive destination for visitors, not only because of the serene and charming scenery that features on it but also the unique cultural identities, including the Tu Linh Boat Race Festival.

During the days ahead of Tet Festival, the bustling atmosphere is rampant on the "island of garlics". In front of the temples in An Vinh and An Hai communes, people gather together to complete the final stages of the preparations for the launching of the boat race. The boats are more sparkling and brilliant under the sea. All people eagerly wait for the festival which will kick off on the fourth day of the first lunar month. Over hundreds of years, the race has become a unique cultural and traditional activity forfishermen in the island district. Even the seniors in the locality do not know the origins of the boat race.

For the local people in Ly Son district, the Tu Linh boat race is not only a traditional community-based activity to welcome the spring but also part of their unique culture and belief, aiming to pay respect and gratitude to their ancestors and the soldiers and sailors of the Hoang Sa Flotilla who crossed the sea to measure waterways, put landmarks, protect and affirm the country’s sovereignty over the seas and islands. The festival also offers an opportunity to pray for a year of favourable wind and rain and a bumper harvest.

Every year, from the fourth to eighth day of the first Lunarmonth, the local people and visitors from the mainland flock to Ly Son for the boat race. There are eight boats from the communes that participate in the event. They are decorated following the images of four holy beasts, including long (dragon), ly (unicorn), quy (turtle) and phung (phoenix). Before the festival opens, the teams have to worship gods with separate rituals. 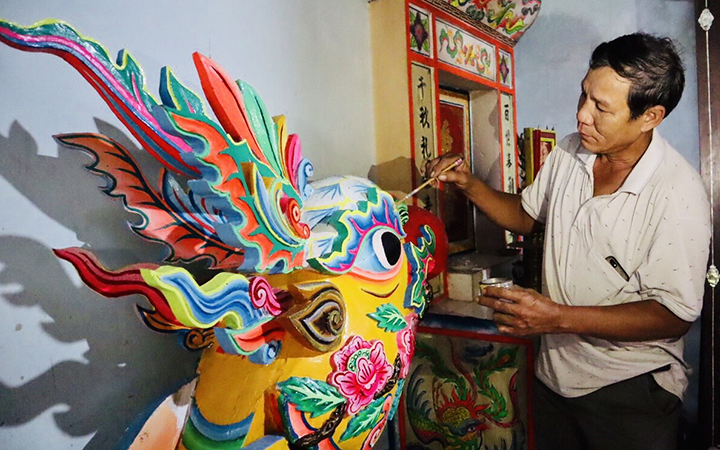 Ly Son’s people believe that the village that has the winning boat will be the most peaceful and prosperous during the year. The participants should be healthy and skillful men. In the past, the boats were designed for only 14 people; however, in recent years, the boats have been built for 24 men. Each team has its own uniform with red scarves on the participants’ heads. The shouts of encouragement, along with the determination of racers, always make for a bustling and lively atmosphere during the festival.

Ly Son boat race festival has been attractive thanks to not only dramatic competition but also due to the sophisticated decorations of the boats, especially the heads and tails of the four holy beasts. It is believed the more beautiful the boats are , the more lucky the team racing will be. Therefore, only artisans with high skills can decorate the boats.

Bui Thanh Hen is an artisan in An Vinh commune, who has designed and decorated the boats for the festival for over 30 years. He said he has drawn the four holy beasts for seven boats this year. The sets of heads and tails of the holy beasts show the sophistication in the designs and colour scheme of the aritst. The relentless creativity has made the over 50-year-old artisan busywith many contracts for decorating boats for the Tu Linh festival. He shared that the hardest phase is the coordination of specific details and colours of the holy beasts to make them soulful. Moreover, the work requires a lot of creativity so that later decorations are not similar then previous ones.

In addition to designing for Tu Linh boats, Hen joined many projects to build and decorate ancient architectural works, including temples in Ly Son district as well as pagodas in many provinces and cities such as Quang Ngai, Hue, Da Nang and Binh Dinh.

He said in the past the heads and tails of boats were usually made of wood, so they were easily bent, buckled, even chipped and broken when they would sometimes accidently crashed into each other. He has used foam rubbers instead of wood to increase the durability of the boats. However, each foam sheet is only 5 cm thick, so it takes a long time to assemble the sheets for shaping.

Artisan Hen is proud of his job that can promote his homeland’s unique cultural feature. However, the young people’s indifference to the traditional craft always concerns him. Realising that his son was gifted with fine artistic skills, Hen trained him to decorate the boats with the desire to preserve the cultural beauty of the traditional festival on the occasion of Lunar New Year Festival.

Vietnam’s captain Que Ngoc Hai has apologised over an advert he posted on social media that allegedly violated the copyright of the national football team.

Tickets for the Formula One VinFast Vietnam Grand Prix 2020 will be valid when the event finally takes place, the Sai Gon Giai phong (Liberated Sai Gon) newspaper quoted the organisers as saying.