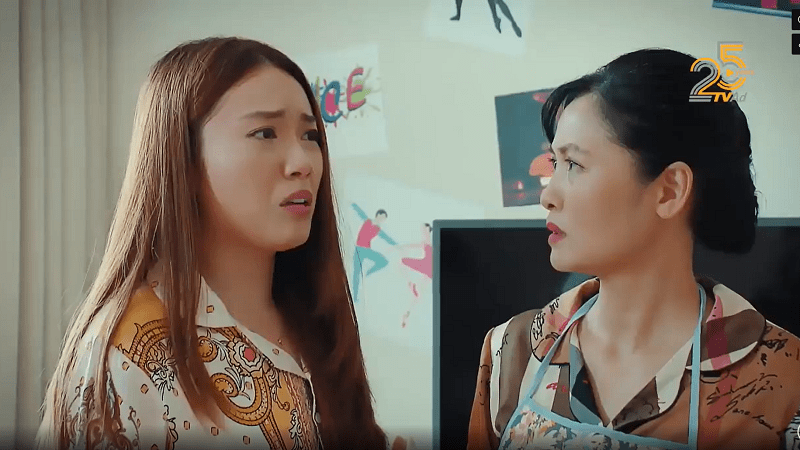 A scene from the TV series “For a Peaceful Tomorrow”

Each 45-minute episode will be broadcast at 9.40pm every Thursday and Friday during the week.

The film explores various situations, both comedy and tragedy, which take place in the daily life of a modern Vietnamese family. Audiences may find their own images in the film’s context under the circumstance that the Covid-19 pandemic has been lasting for so long and everyone has to comply with the government's social distancing directive, according to film director Vu Truong Khoa.

“Through this TV series, the film makers desire to convey the message about the importance of family, praising the strong bond between all the members; at the same time cheering everyone up during the pandemic, toward a better tomorrow,” Khoa said.

“For a Peaceful Tomorrow” tells story about the four-member-family of Phat (played by People's Artist Trung Hieu)- director of a local construction company.

A middle-class man, Phat had the typical personality of a middle-aged man who was born and raised in the northern part of the country: sexist and difficile. He was strict with women and has trouble showing love to his family.

Faced with the risk of bankruptcy from the pandemic and having to spend too much time at home, Phat found that family life was much more complicated than he imagines.

Divergence of opinions and generation gap sparked various quarrels between him and his two daughters: Tra - an unemployed tour guide and Mai Khoi -he rebellious youngest teenage daughter.

Meanwhile, Truc (Phat’s wife) is a typical Hanoian housewife. The full-time dedicated housewife always shows submissiveness to her husband and has a great love towards her family.

Aunt Mai - Truc's younger sister is an interesting woman who plays the central role in the film.

The nearly 40 years old beautiful woman who got divorced twice has the personality and thought of an ‘immature’ girl. She repeatedly failed with uncountable ‘start-up projects’ because of the pandemic, and thus, wasted all of her sister’s savings. Mai always confronts Phat and is considered as the villain of the family by him.

Life became more complicated when Phat’s father and younger brother came to visit from the countryside and get ‘stuck’ in Hanoi by the social distancing regulation. From this point in time, many funny situations occurred in the family.

However, when faced with difficulties, Phat better realized about the importance of the sharing and understanding in the family. The stay-at-home order united all members of his family and has them learn how to live more harmonious with each other.

The TV series ‘For a Peaceful Tomorrow’ also tells the story of the lives of workers trapped at a construction site because of the pandemic. They are forced to survive in difficult conditions. In that context, the spirit of solidarity and mutual love of the Vietnamese people is promoted.