The hobby of collecting vinyl records has become popular again, not only in foreign markets but also in Vietnam.

The Recording Industry Association of America (RIAA) said recently that the world vinyl record market is making an unexpected breakthrough.

The reasons are twofold: CD sales have dropped dramatically in recent years, while sales of vinyl records are actually up this year.

The number of best-selling vinyl records marks a turning point for the type of record that has been loved for many years by collectors and music lovers.

According to experts, the pandemic is also one of the reasons why people have turned to vinyl. Due to COVID-19, concerts are out of the picture, so people want to enjoy music by listening to limited edition vinyl records of their favourite artists.

Many experts feel that the old-school analog audio provided by vinyl sounds is superior to digital audio, especially the compressed digital formats used by streaming services.

This is the third time that Quang Dung has released a vinyl album. For vinyl products, Dung spends at least three years to complete them.

"Listening to a vinyl record is a good experience. You close your eyes and imagine that the singer is standing in front of you," the singer said.

Nguyen Ngoc Thien, director of Audio Space Production - Release Company, said the vinyl market is now more profitable than it was five to seven years ago.

Many artists have started to release music products on vinyl.

For example, honoured artist To Nga surprised the public by releasing the album "Moon" on vinyl. Singer Dong Lan also released a vinyl record "Do you remember" with songs by musician Trinh Cong Son that attracted the attention of many people.

A series of new albums of vinyl records (analog recordings) were released recently in HCM City, introducing a new element in the local industry that is dominated by digital CDs and DVDs.

Young generation of pop singers forge their own path to stardom

While the Vietnamese music industry has long been dominated by the millennial generation of artists born in 1981-1996, a younger generation with a new approach is shaking up the industry. 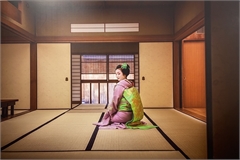