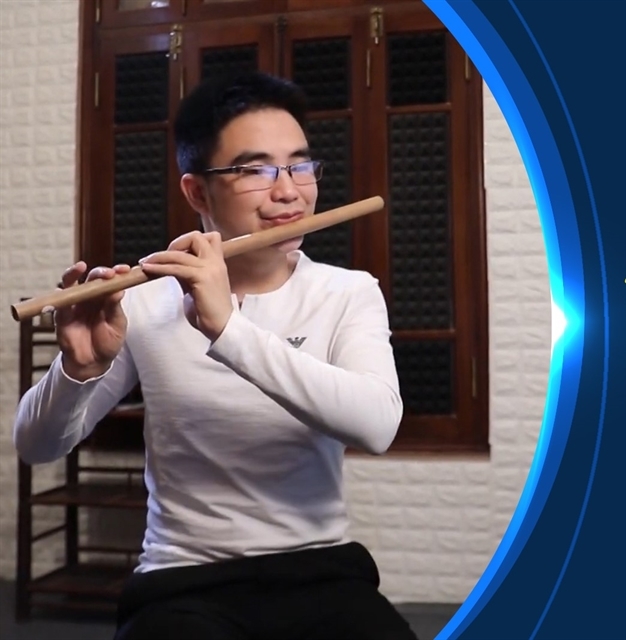 Bui Cong Thom,  lecturer in bamboo flute at the Faculty of Traditional Music, the Vietnam National Academy of Music

"Though it surely can never fade away, it will prevail if the audience can access it on digital platforms," said Bui Cong Thom, a young lecturer in bamboo flute at the Faculty of Traditional Music, the Vietnam National Academy of Music.

Thom, 31, is a pioneer of traditional music, particularly the bamboo flute, playing on social networks and the internet.

He is making a great contribution to preserving, inspiring, and popularising bamboo flute music through his lively online lessons.

His current online Thien Sao (Flute Meditation) group has more than 900 members and was set up to encourage professional flute playing.

Thom's musical talent was discovered when he was nine by artist Le thai Son who tutored him until he gradually fell in love with the flute.

The young artist still remembers his first acquaintance with traditional flute music in 1997 when he followed his brother to attend a class by artist-teacher Sơn in the communal hall near his house.

"That was really a nice secret of our childhood. My parents only allowed my brother to study flute, not me. But love toward such nice music attracted me so much that I hid from them to follow my brother to attend the class,” he said.

“They only knew about that after our teacher came to convince them to let me study the flute. He told them he had discovered a talent of mine."

After just two years, Thom officially started his profession as a flute player and has since entered the bamboo flute section at the National Music Academy.

Right from his first year at school, he confirmed his talent with many prestigious awards, including the Gold Medal at the Festival of Folk Singing and Performance of traditional instruments organised by the Hanoi Children's Cultural Palace in 1999 and 2003.

Thom said that through his teaching, he found that many people liked to play bamboo flute but did not have the conditions to study and chances to enjoy it.

In 2012, taking advantage of developing digital technology in the country, the artist boldly posted his performances and lectures on social networks and surprisingly attracted much public interest.
His YouTube channel and Facebook page Sáo trúc Bui Gia (Bui Family's Bamboo Flute) currently has nearly 42,000 subscribers, and is increasing day by day.

Besides lectures at the music academy, he teaches bamboo flute online and posts many of his performances on social networks.

“Many people say teaching bamboo flute online is very difficult, but in my opinion, it is difficult or easy just depending on the enthusiasm and goals set by the teacher. I always ponder, think and find ways to communicate with learners so that they can make progress in performing," said Thom.

He believes that very few people have knowledge of basic music theory while playing the flute so most players just learn it by imitating each other.

"Flute-playing is very distinctive from playing other instruments as it combines various techniques including those related to the moving of fingers, tongue, lips, and teeth,” he said.
“Through online teaching, I try to convey basic knowledge and techniques in the most understandable way and guide learners to perform better and more professionally."

Meanwhile, flautist Duc Lien, a former official of the Vietnam Music and Dance Theatre, said: "Thom was a flute-playing talent since he was a boy and with his enthusiasm, passion and endurance during learning and training, he has had success. His efforts in popularising the bamboo flute among the young are remarkable.”

Thom also makes flutes professionally at his own reputable workshop. He has made thousands for both domestic and foreign markets.

His opinions on the importing of foreign music are even-handed.

"The young audience now are enjoying a new trend of music genres such as pop, hip-hop, and rock because they have more chances to approach it. The reason traditional music including the bamboo flute is declining is that people have fewer chances to know about it," he said.

The artist revealed that during his talks with the audience after performing, he was often told the work was amazing.

"Young audiences often told me it was the first time they directly enjoyed a flute performance and they never thought how nice and beautiful a flute sounds before,” he said. "This was very different and more charming than modern music that they listen to via radio or other broadcasting channels."

The artist said a live show of the bamboo flute really helps the audience to feel the real beauty and value of folk music art so they have more passion to learn about it.

The young artist has a goal to preserve traditional music, particularly the bamboo flute, by making it more popular among the young and the wider community. He also wants to help change the idea that playing a bamboo flute is just about studying and imitation.

Speaking about his challenges during the current pandemic, Thom said although it had great impact on many fields of life, particularly in music training and education, he was optimistic.
"It is actually a filtering, I think, because it will be a chance for us to prove our thoughts and bravery to overcome challenges," he said.

"When I realised COVID-19 might become a serious global outbreak, I moved my career to online activities. It was an active, not passive action so my online classes are really useful and effective right now.”