The Vietnam Football Federation (VFF) has requested that 20,000 supporters be allowed to attend the 2022 World Cup qualifying match between Vietnam and China on February 1. 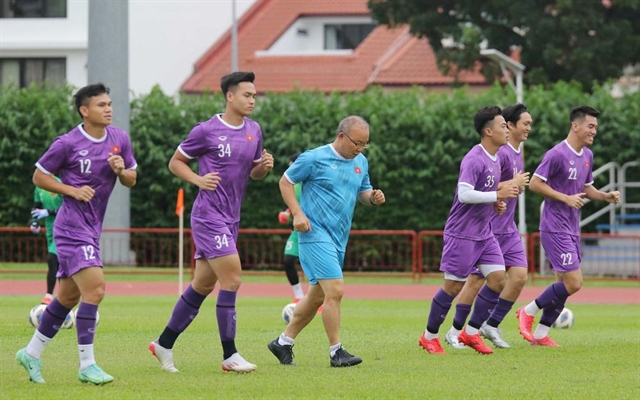 Vietnamese players training in Singapore for the AFF Cup. The VFF hope that 20,000 fans will be able to attend Vietnam's next 2022 World Cup qualification match on February 1. — Photo courtesy of VFF

The match will be played at Mỹ Đình Stadium in Hanoi, which has a maximum capacity of 40,000 fans.

The Deputy Minister of Culture, Sport and Tourism Hoang Dao Cuong has agreed with the proposal, providing the COVID-19 pandemic is under control in time. February 1 is the first day of Vietnam's Tết (Lunar New Year) Festival.

Vietnam's games against Japan and Saudi Arabia last month, also played at My Dinh Stadium, were attended by 12,000 supporters.

Deputy Minister Cương asked the organisers to make plans for more people to attend upcoming games, to meet the high demands of local supporters and to provide more encouragement for coach Park Hang-seo and his team.

After the China game, Vietnam will face Oman on March 24.

Vietnam  are currently in last place in Group B after losing all six of their matches so far.

Coach Park Hang-seo is without defender Đỗ Hùng Dũng, who has not yet received permission to enter Singapore.

Dũng was a late call-up for the national team, meaning his entry documents have not yet been processed.

When the reigning champions flew to Singapore on December 1, Dũng had to go back home and wait. As a result, he is a doubt for Việt Nam's opening match against Laos on Monday.

Midfielder Nguyễn Hoàng Đức has been highlighted as one of ten potential stars of this year's cup by ESPN.

Their website claims that: "Although Nguyễn Quang Hải has been one of the catalysts behind Việt Nam's rise over the past four years, there are some in Vietnamese football circles who believe his talent could be matched by Nguyễn Hoàng Đức.

"While Hải excels more in the attacking third, Đức is equally influential in the defensive aspect of the game as he is offensively, and is also a real threat from dead-ball situations, even if he is currently lower in the pecking than the former."

Vietnamese footballer Hoang Duc has been named in the AFF Suzuki Cup 2020 Team of the Tournament, as selected by sports broadcasters ESPN.

Yen (Canary) stream is located about 60 kilometres from the centre of Hanoi, also known as Yen Vĩ (Canary Tail), because of its shape like the tail of a canary.

The Hanoi municipal administration has decided to put on a fireworks display at an only one venue to welcome in the lunar New Year 2022 on January 31 evening.

“Going home” - a free tour at Cuc Phuong National Park launched in March - allows tourists to release animals back into nature, thereby helping spread the message of nature conservation among the public.