Korean stars to attend award ceremony in Hanoi this November

A host of Korean stars, including Park Min-young, Yoona, and Lee Jung-eun are scheduled to touch down in Hanoi this November for the Asia Artist Awards 2019 show, according to the ceremony’s organising board.

A major star taking part in the awards show will be 33-year-old Park Min-young. She is most well known for her role as the main character in the popular film “What's Wrong with Secretary Kim”.

Alongside Park Min-young will be 29-year-old Korean singer and actress Yoona. She first rose to prominence as a member of girl group Girls' Generation, which went on to become one of the Republic of Korea’s (RoK) best-selling groups.

Completing the trio will be Korean actress Lee Jung Eun who impressed global audiences with her performance in the Korean black comedy thriller titled “Parasite”, which won the Palme d'Or at the 2019 Cannes Film Festival.

First established in 2016, the Asia Artist Awards are held to honour artists who enjoy significant achievements in both music and cinematography in the RoK and throughout Asia.

According to the organising board, this year’s event is expected to attract hundreds of leading artists from the RoK, Vietnam, and a variety of other Asian countries.

The event is set to take place at the My Dinh National stadium on November 26. VOV 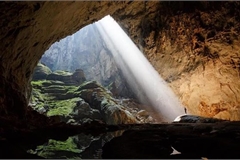 All 1,000 slots for Son Dong expedition adventure tour to the world’s largest cave in the central province of Quang Binh have been fully booked by domestic visitors for 2022, according to the provincial Department of Tourism.