It is an encouragement award for the Vietnamese team as competing with strong opponents from Russia, China, and Belarus. 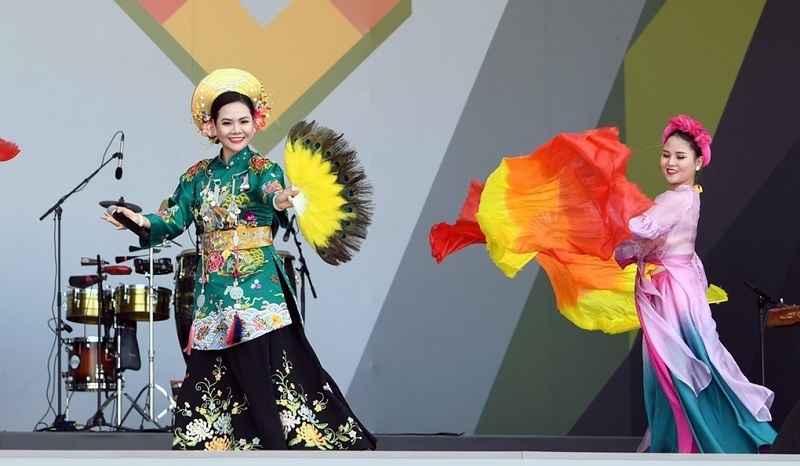 Singer Nguyet Anh performed in the ‘Army of Culture’ contest that took place from August 22 and September 1 in Moscow, Russia. Photos courtesy by the artist

With an impressive performance, singer Luong Nguyet Anh won the third prize for Female Solo in the "Army of Culture" competition at the International Army Games 2021.

It is an encouragement award for the Vietnamese team as competing with strong opponents from Russia, China, and Belarus who joined the competition this year.

Singer Luong Nguyet Anh had a sublime performance of the Chau Van folk song entitled Co doi thuong ngan (Goddess of the Forest) at the competition that took place between August 22 and September 1 in Moscow, Russia.

Along with the winning song, Nguyet Anh also performed the famous Russian folk song entitled ‘It Hasn’t Been Dark Yet, My Goddess!’ and staged a duet with Trinh Phuong, a member of the Vietnam contingent joining the ‘Army of Culture’ contest, the Aria song from ‘The Phantom of the Opera’ musical.

Vietnam's cultural and artistic contingent took the fourth position among 20 military art troops joining the competition. The overall first prize of the 'Army of Culture' contest belongs to the host country Russia, the Chinese contingent won the second prize, Belarus and Kazakhstan shared the third prize.

The contingent also bagged the third prize in the couple dance contest and the second prize in the group dance competition and exhibition activities.

In addition, Vietnam won trophies for being the team whose introduction video had the highest number of views (159,000) and votes.

According to Colonel Dang My Hanh, head of the Vietnamese art troupe, the art jury was quite demanding. They set strict requirements for the participating teams, from the artistic factors in the performances, to the mastery of individual skills and the expression of national cultural identities.

“For such of the reason, Vietnamese contingent has the right to be proud about the achievement,” she stated.

Anh said that she felt quite pressured and stressed before participating in the contest because other competitors are very strong, especially those from Russia and China.

“However, with the spirit of a soldier and the determination of an artist, and thanks to the support of other members of Vietnam People’s Army art troupe, I have tried my best," Anh said. And, I am proud to have won the third prize at the competition.”

Renowned folk singer Anh is the lecturer of Military University of Culture and Arts. She was also the winner of the Morning Star Singing Contest in 2020.

Cultural and artistic performances have been listed as a category for a competition entitled “Army of Culture” for the first time at this year’s Games.