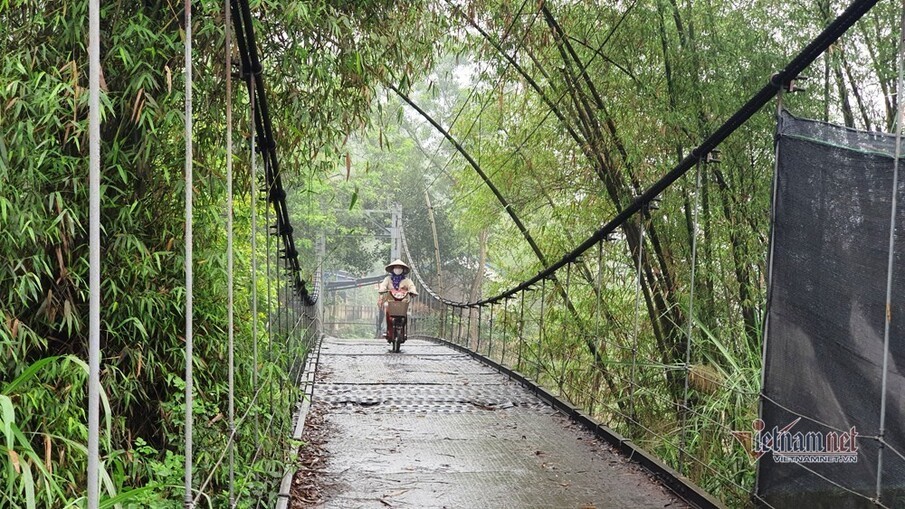 The bridge, situated in the middle of nowhere, has a special history and a special operator, an 82-year-old woman named Nguyen Thi Ngai.

People in the mid 2000s had to travel nearly 10 kilometers to reach the district’s market to sell vegetables, fowl or eggs.

So Ngai and some local households set up a bamboo bridge spanning the river. They collected VND1,000 from every crossing vehicle, while pedestrians with bamboo frames on their shoulders and students were exempted from the fee.

When forest rains came and river water ran fast, the bamboo bridge swung like a thin leaf amidst the eddy, threatening the lives of people on the bridge.

The commune authority said the unsafe bamboo Bridge had to be removed.

“We made the bridge to serve people, not to make money. So we agreed with the local authorities,” she said.

Five years later, in 2005, a state-owned company built a solid cable-stay bridge under a contract with district authorities, capitalized at VND500 million, under the Build Operate Transfer (BOT) mode.

The bridge has two H-shape iron poles at the two ends which hold the cables, while the bridge deck has iron sheets with holes for drainage.

In 2006, when the bridge was put into operation, the investor set up a toll collection station at the end of the bridge.

People had to pay a toll of VND2,500 to VND25,000, depending on the type of vehicle, while pedestrians did not have to pay a fee.

However, many people did not want to pay a fee and they beat toll collectors, attacked the station’s door, and stood on the bridge to cause congestion.

Ngai, who lives at the end of Dat Ma Bridge, saw workers being beaten many times and felt sorry for them.

“The toll collectors came from other areas to work for wages, so they were beaten and assaulted without resistance. More than 10 years ago, the area where we live was still a remote area with low intellectual standards,” she said.

A mining worker one day refused to pay the toll, VND2,000 per motorbike, saying that he was a local man, though he earned several million dong a month.

On other days, he "played dirty". He gave the toll collectors bank notes with the nominal value of VND100,000 to pay the fee, but the collectors had to use a lot of small change.

Many disputes occurred at that time which needed the intervention of the police.

Finally, an investor came to meet Ngai and asked her to help the company’s workers collect the fees.

The solution helped the tense situation. Ngai gave all the money she collected to the company, and people no longer protested against the fee payment.

In 2007, the company asked Ngai to work with them. Under the cooperation agreement, Ngai needed to pay VND5 million a month to the company.

So, Ngai, her husband and daughter-in-law became the fee collectors, working a shift from 6 am to 9 pm on sunny and rainy days.

While she was on duty, she worked with a radio, listening to all programs, one after another, to entertain herself.

On April 1, the investor transferred the BOT bridge to the local authority as committed before.

“I feel a bit sad as I have to give up my habit of getting up early and coming to the bridge,” she said.

Pham Kim Oanh, chair of Giang Tien Town in Phu Luong district, said both travel and trade in the locality have improved considerably since the bridge opened.