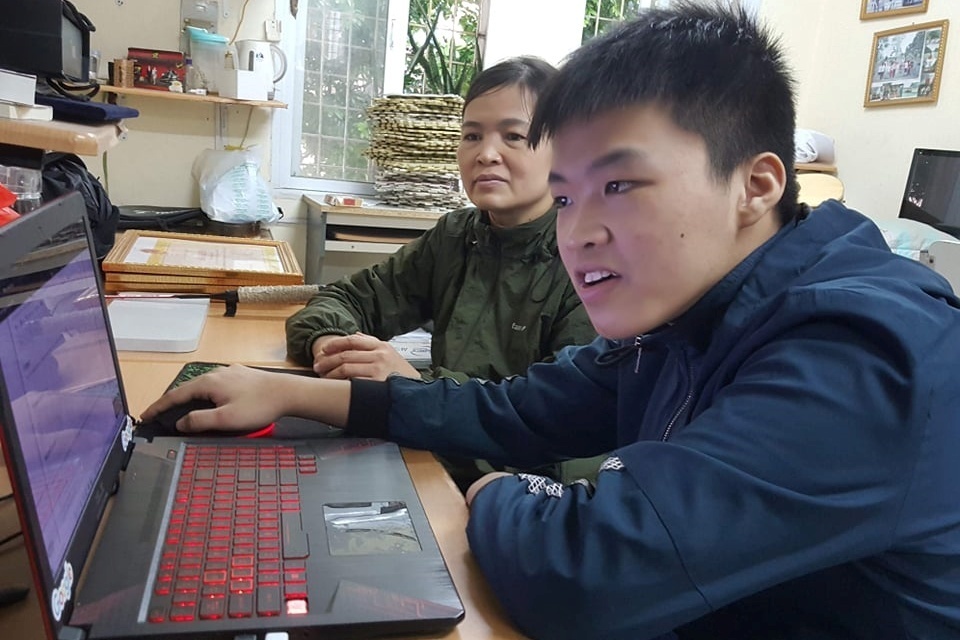 Nguyen Duc Thuan and his mother

Nguyen Duc Thuan, a 12th grader majoring in informatics at the Bac Ninh High School for the Gifted, recently won the second prize at the national competition for excellent students. This is the second time he has won high prizes from the competition.

Do Thi Hoai San from Que Vo, Bac Ninh province, the mother of Thuan,
never dreamed of such an achievement. The mother's wish during the last 17 years is that Thuan would have a happy and healthy life.

Thuan was a difficult birth, which lasted 4.5 hours. The mother noted that the child’s hand was folded down and abnormally dark purple. And he did not cry for the next two days. San asked for help from physicians. But when Thuan began crying, he cried loudly all night.

San brought her son to all hospitals over four months and collapsed when hearing that the boy had cerebral palsy.

He sobbed convulsively every night, while the body was as soft as a noodle. San shed her tears when looking at the baby.

“The naps were so short that they were calculated in seconds, not in minutes or hours,” San recalled.

Three years later, Thuan’s body was soft, with head unable to turn over. The mother had to carry her son on her shoulders through the night.

When Thuan turned four years old, he could speak, but just babbled and only the mother could understand his words. San then decided that she needed to bring the boy to school.

Both Thuan and the mother had to be present in class. The mother had to sit next to Thuan all the time, with her arms behind Thuan. If the teacher spoke a little loudly, Thuan could be startled and fall.

Despite difficulties, teachers said Thuan did better in school than other classmates.

At the age of 4, Thuan was able to read 10 or 11-digit phone numbers after hearing several times. By the time he went to kindergarten, Thuan could add, subtract, and remember all the letters, though he was not taught by anyone.

When he entered the third grade, the mother did not have to escort him, because the teachers created a specific chair for him to sit without help from the mother.

When the son was at school, San worked as a hired laborer. Her husband is a soldier who was always far from home. They saved every dong to treat the son.

“Thuan is an insomniac. He tosses and turns in bed all night. So, I also cannot sleep. He still cannot stand up and sit down, or walk by himself. So, I don’t allow myself to be sick. Even if I am sick, I still have to pick up and take care og'f my child,” San said.

During 12 years at general school, Thuan was the best student in the class. When he was in 11th grade, he won third prize at the national competition for excellent students, the achievement which allowed him to enroll in the Bac Ninh High School for the Gifted. One year later, he won. second prize at the same competition and first prize at the National Young Informatics Contest.

“My son met so many good teachers and friends,” San said about those who had helped him. Thuan’s teacher gave seven private lessons a week to him for free.

The teachers at the High School for the Gifted in Natural Sciences created favorable conditions for Thuan to study together with friends on the school’s team.

The teacher, when he was in second grade, helped his mother borrow money to pay for leg surgery and kept contact with a regular message ‘Are you okay?”

Thuan said there are many good people and he needs to make bigger efforts to deserve their sacrifices.

“I was very sad and burst into tears when someone teased or discriminated me. But then so many good people appeared. They served as the fulcrum that helped me overcome obstacles,” he said.

Thuan dreams of becoming a student at the University of Technology, and a coder in the future.

“I want to become a useful person in society, not a burden,” he said.

Thanks to the love of her job and her sympathy for disadvantaged children, Nguyen Ngoc Hanh has helped many students with autism learn to read, write, and spell their name. 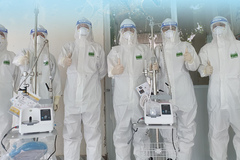