There are many mothers who fear when their child grows up and becomes a young adult, they may well let go of the apron strings.

No more hugs, kisses will become less and less frequent, and everyday affection will fade away like a distant memory.

“Compared to her siblings, she expresses her love to others more often,” said Khánh.

“Her brother and sister were not close to their parents once they got older, not holding hands, hugging, comforting, but she is still cuddling, worrying about me.

“If I cough or feel tired, she will massage me, bring water for me.”

Eight-year-old Lan Nhi is one of the millions of people in the world with a condition known as Down syndrome.

The disability is caused when a child is born with an extra chromosome. It affects about one in every 1,000 newborns.

In Việt Nam, there are no official organisations or schools that are specialised for children with Down syndrome, so they mostly depend on their families for care.

With such a young child to look after, Khánh knows she has her work cut out. But she hopes as Lan Nhi gets older, she will be able to help her lead as normal a life as she possibly can.

“In the future, when she gets bigger, then I will take her to a vocational school that specialises in disabled kids,” said Khánh, who lives in HCM City.

“This type of school will teach those children like her to make toothpicks, or paper boxes, cotton things. I will have to wait until she is older, but I will ask for permission to let her attend this school.”

Before giving birth to her son Hiểu Minh, Nguyễn Huyền Trang from Hà Nội had serious concerns about children suffering from Down syndrome.

But since he was born, her love for her son knows no bounds.

She said: “Before, I thought this disability is really horrible, but after Pi (Hiểu Minh’s nickname) was born and gradually grew up, he has been more and more adorable.

“The truth is when comparing Pi with his older brother, he is more sentimental, and really loves everyone in the family. If anyone even has a headache or a scratch on a hand, he will panic and run over to help.

“He is happy, often laughs and rarely cries. Even when he is in pain, he still endures it. Besides all those things, he is like other children, just more sentimental.”

Hiểu Minh play with his friends at his kindergarten.

However, like any mother hearing her child is not “normal”, let alone suffering from a condition that can’t be cured, Trang felt like the sky was falling down.

She was overwhelmed with thoughts of how to face others, scared of pitying look from others and wondered how she would explain her kid’s situation. But after thinking it through, she chose to be positive.

“The first three months after he was born, I didn’t dare show him to anyone. I could accept it, but I was afraid others couldn't. Now, I often show him on social media, but before I just took pictures of him and kept them to myself. After that I thought my kid has no faults, why do I have to hide him away?

“For example, other kids are not so pretty, but parents still show them off, then why I can’t while my child is so nice.”

“But each year has its concerns," Trang said.

When Pi was a baby, Trang was scared of the reaction from other children when she tried to enrol him in preschool. She could not have been more wrong.

“The teachers were also nervous at first, but after 1-2 weeks, they said he blended in well, beyond their imagination.

“He behaves well, helps teachers by tidying toys, rolling out blankets, pillows, he can do it all. So I don’t worry much about him going to school," she said.

Trần Thị Kim Oanh is the mother of 13-year-old Nguyễn Thế Minh. She has tried her best to enrol him in mainstream schools.

“After he turned 3-4 years old, he learned and knew somethings, but I gave birth to a second child so I took him to my parent’s house. When he was six, I brought him to Hà Nội to live with me then I let him go to a private school. After half a year, I saw he could recognise the alphabet and numbers, and I started to tutor him so he could read and write. When he was eight, he went to Trung Tự primary school.” 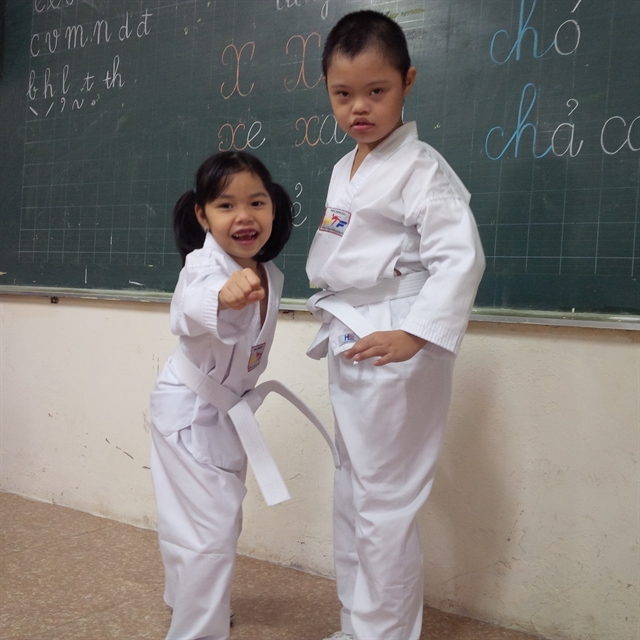 Thế Minh can play many sports games, including taekwondo

With the love of a mother, she also did her best to spend as much time as possible with him, teaching and playing with him. Therefore, her kid can not only play many sports but also can do maths.

"After school, he stays to play basketball. Teachers at school also like him and let him play with other friends. He is also good at playing basketball since he is taller than primary students. He also plays football, and when he is back home, he also goes to the swimming pool with his siblings.

Like many other mothers with children born with Down syndrome, Oanh, Trang and Khánh know there will be many more challenges ahead for their kids but love and care will guide their way. — VNS

•    It is named after British doctor John Langdon Down, who fully described the syndrome in 1866.
•     It is usually associated with physical growth delays, mild to moderate intellectual disability and characteristic facial features.
•    As adults, their mental abilities are typically similar to those of an 8- or 9-year-old.
•    The parents of the affected individual are usually genetically typical.
•    People with Down syndrome may have some or all of these physical characteristics: a small chin, slanted eyes, poor muscle tone, a flat nasal bridge, a single crease of the palm, and a protruding tongue due to a small mouth and relatively large tongue.
•    The probability increases from less than 0.1 per cent in 20-year-old mothers to 3 per cent in those of age 45.
•    Down syndrome can be identified during pregnancy by prenatal screening followed by diagnostic testing or after birth by direct observation and genetic testing. There is no cure for Down syndrome.
•    In Việt Nam, there are nearly 2,000 children with Down syndrome born each year.