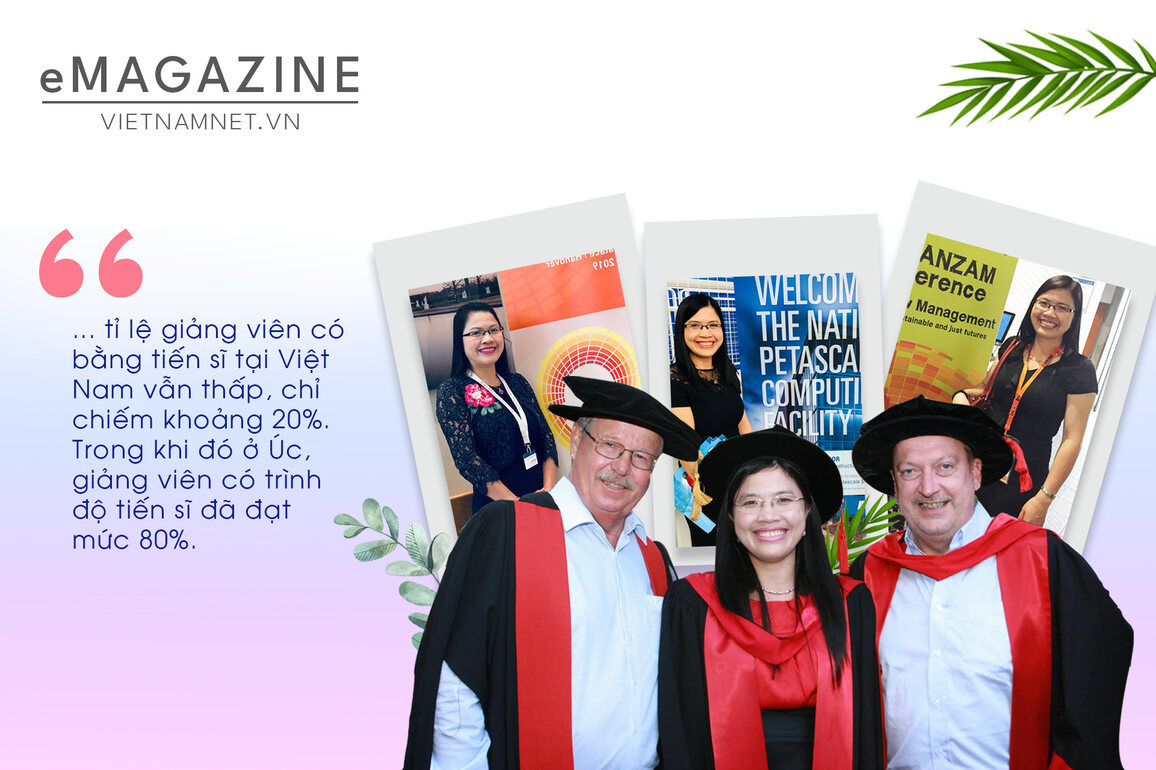 More than 20 years ago, Huong was one of 12 excellent graduates at the University of Foreign Languages, a member school of Hanoi National University. After graduating, she got a job as a lecturer at the Hanoi University of Industry.

She never thought the decision would lead her to a turning point in her career. As a young lecturer, she was passionate about finding opportunities for international cooperation.

Becoming the head of the international cooperation division and then the Dean of Foreign Languages at the age of 27, Huong said it was a challenging position.

“There were then 130 officers and lecturers, while I was just 27. My advantages were the potential for professional development and enthusiasm of youth,” she recalled.

Huong spent a lot of time traveling from the north to the south and visiting many universities to learn about their training programs. The young dean also took full advantage of the support of international experts, inviting them to Vietnam to develop some learning subjects.

Huong found that there were some subjects that were ‘useless’, which students would not apply in real life.

Huong then was under pressure because few people believed in her philosophy. But 10 years later, she was happy to hear from students trained in the new program, who said the subjects helped them a lot in applying for jobs and in their work.

Huong felt happy with her job as the board of management of the school created favorable conditions for her to turn her ideas into reality.

The subjects that Huong laid a foundation for are still being used at the school and some have become compulsory.

But after nine years of working as a dean, she decided to leave.

“I was always thinking about issues in tertiary education administration in Vietnam. So I decided that I needed to study abroad and come back to Vietnam to do better,” she said.

She resigned from the post and applied for a 1.5-year study course in education management Australia.

In 2008, she left Vietnam for Australia, while her husband left for Japan. Their child was left with the grandparents.

Huong admitted that when "coming back to the starting point" after nine years of working, while her friends were obtaining a doctorate, she faced a small crisis when trying to answer the questions ‘who am I’ and ‘what am I doing’. However, she received practical knowledge about tertiary education administration and had a long-term vision.

The experiences she had in Vietnam when she was a dean helped her finish the master’s degree, winning an award for the best thesis. The thesis was later published in two international articles.

After that, she continued studying four years for her doctorate and became a managerial officer and lecturer for the postgraduate training program at Swinburne University.

She then worked for UNESCO (United Nations Educational Scientific and Cultural Organization) as an expert analyzing tertiary education management policy after leaving Swinburne.

According to Huong, the number of lecturers with a doctorate in Vietnam remains modest, accounting for 20 percent, much lower than the 80 percent in Australia.

In international practice, a doctorate is just the start of an academic career.

She believes that the state should invest more heavily in training to produce more PhDs and require university lecturers to have a doctorate.

Another issue that Huong is interested in is scientific research capability of universities in Vietnam.

Vietnam’s universities now just focus on training, not on creating knowledge, which universities in developed countries do.

If universities have lecturers who can carry out research and publish internationally, they will be able to integrate into the "flow of knowledge". If not, they will just "sit and see what the world is doing".

Huong thinks that in order to develop research capability, Vietnam needs to have some top-tier universities and leading experts who can transmit knowledge to other schools.