Having money but not spending is unacceptable: PM

Prime Minister Nguyen Xuan Phuc, who chaired an online conference on the disbursement of development programs, ODA projects and preferential foreign loans on October 29, said the disbursement has been going very slowly and asked to find the reasons behind the problem. 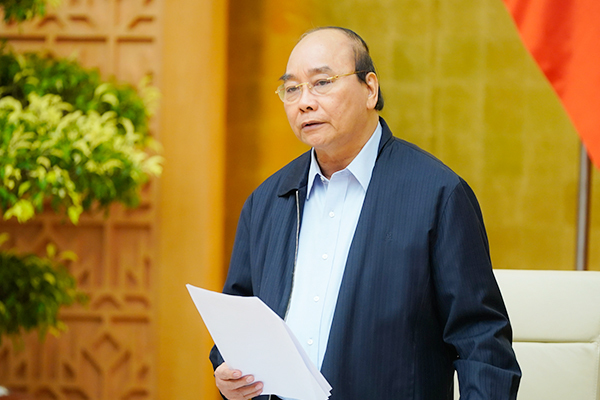 Phuc requested to clarify which agencies placed difficulties in administrative procedures for disbursement and caused problems during disbursement.

He said authorized individuals, agencies and management boards have to settle problems themselves, and not ‘pass the ball’ from provinces to the central government.

Emphasizing that the disbursement rate must be higher by the end of the year, Phuc said localities that cannot do this need to report to the Prime Minister, so that the government will transfer allocated capital to other localities and will never allocate capital to them in 2021 and 2022.

“There must be strong sanctions,” he said.

Minister of Planning and Investment Nguyen Chi Dung reported at the conference that ODA disbursement had reached VND18.089 trillion as of October 31, or 30.15 percent of the plan assigned by the Prime Minister.

Since activities of ODA projects depend on foreign elements, the implementation of the projects has been adversely affected by Covid-19.

The pandemic has caused delays in importing machines and equipment, and in mobilizing specialists, foreign contractors, supervisors, consultants and workers.

In the case of the HCM City urban railway project (Ben Thanh – Suoi Tien section), for example, 100 foreign specialists could not come to Vietnam as planned and the import of equipment was also affected.

Dung said the government should set up a special policy allowing foreign specialists and consultants to enter Vietnam under the same conditions as short-term entry specialists.

The differences in administrative procedures between Vietnam and foreign contractors have also caused delays.

Hoan proposed that the Prime Minister should instruct the Ministry of Planning and Investment to soon define the ODA capital to be allocated to the two subway projects from the state budget, in Vietnamese dong, to speed up disbursement for the projects.

“Only when you are determined to set a specific goal will you be able to do this,” he said. “If the secretaries and chairs of cities and provinces don’t supervise and speed up the disbursement, the situation won’t improve."

Phuc emphasized that local authorities have to disburse as much capital as they are allocated and not let money become stagnant.

“Investors and contractors complain that they have to come to agencies many times,” he said.

The Prime Minister asked ministries and branches to continue completing the legal framework to better use ODA and disburse the capital, which serves the drawing up of a medium-term five-year plan.

“Having money but not spending is unacceptable,” he said. “This shows mismanagement, which must be changed."

Ahead of Hanoi's upcoming Party Committee Congress, Vu Ha, deputy director of the city's Department of Transport, talks about his department’s plans to improve transport infrastructure in the capital.

Minister of Planning and Investment Nguyen Chi Dung has urged localities in the south-east and Mekong Delta regions to develop transport infrastructure by diversifying the sources of and effectively using capital over the next five years.