The Ministry of Health has decided to set up 12 Covid-19 national intensive care centers in three regions with the total capacity of 7,900 ICU beds amid the complicated developments of the pandemic in Vietnam. 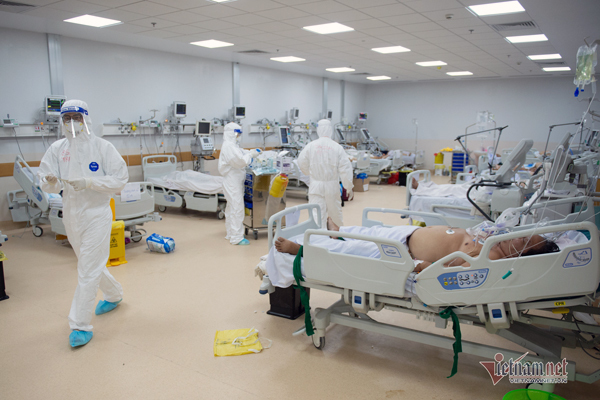 Minister of Health Nguyen Thanh Long said that the increasingly high number of Covid-19 infections is challenging the country’s medical system more than ever before.

Long has decided to set up 12 Covid-19 national intensive care centers in three regions with the total capacity of 7,900 ICU beds amid the complicated developments of the pandemic in the world and Vietnam.

Since April 27, Vietnam has been facing the fourth outbreak, which has caused serious consequences. The number of infections has exceeded 100,000.

The pandemic has spread and is complicated with more serious variants, especially Delta. The number of severe cases is three times higher than in previous outbreaks and the mortality rate is higher. Vietnam has reported more than 1,000 deaths.

“The medical system is facing challenges which have never been seen before,” Long said.

The Government and Prime Minister have asked localities to strengthen intensive care capability, focusing on treating severe cases to minimize the mortality rate.

However, many localities are still not ready to receive and treat severe cases. The resuscitation capability in many localities is inadequate and weak, not capable of adapting to the scenario of the ‘super-infectious’ variant.

The number of specialists in resuscitation is limited. There are over 2,000 doctors working in emergency/resuscitation department throughout the country, but many localities are seriously lacking this staff. In some Mekong Delta provinces, there is only one ICU doctor in one province.

When provinces have severe patients, they tend to forward to central hospitals in Hanoi and HCM City. This causes overloading at central hospitals and difficulties for the Ministry of Health (MOH) to mobilize resources and allocate equipment, materials and finance to localities.

The transfer of severe patients to central hospitals in Hanoi and HCM City may lead to a higher risk of spreading Covid-19 into inner city areas. Meanwhile, patients face a higher possibility of dying on the way.

It would be better to treat severe patients in localities with the consultancy of central hospital doctors or leading specialists.

No province can stand on its own feet

“When outbreaks occur, provinces all have big challenges in receiving and treating patients. No province can be self-reliant in treating local patients without support from the central government and neighboring provinces,” Long said.

There are also problems in the number of ICU beds. A recent survey found that Vietnam has 16,000 ICU beds in 2021, but the number of beds and resuscitation capability still cannot satisfy demand.

Many localities lack equipment to treat severe cases. Many hospitals have ICU beds but don’t have central oxygen and compressed air systems, so they cannot use ventilators. They lack cameras and central monitoring centers, which makes it difficult for doctors and nurses to supervise the developments of severe cases.

The ICU of many hospitals cannot carry out complex resuscitation techniques, such as invasive/non-invasive mechanical ventilation, ECMO (extracorporeal membrane oxygenation) and dialysis.

Only a few hospitals can conduct ECMO, including Bach Mai, Central Hospital for Tropical Diseases, Vietnam-Germany Friendship Hospital, Cho Ray, Hue General Hospital and Can Tho General Hospital. The others lack specialized equipment and investments and have unreasonable pay.

Vietnam needs to improve the emergency and intensive care capability at hospitals nationwide to be able to receive severe patients, which is predicted to increase in upcoming days.

The 12 national intensive care centers are under the direct management of the Ministry of Health (MOH). They implement commands from the ministry’s leaders and the Department of Medical Examination and Treatment.

The centers are treatment facilities at the highest level, tasked with collecting and treating patients and implementing the most complex and highly intensive resuscitation techniques for severe and critical cases.

Long said that the establishment of these centers is urgent, which needs the involvement of the Government, ministries and local authorities, not just the health sector.

A total of 4,246 new COVID-19 cases, including 21 imported infections were recorded on August 1 evening, sending the daily infection tally to 8,260, according to the Ministry of Health.