Minister of Home Affairs: state apparatus is too cumbersome 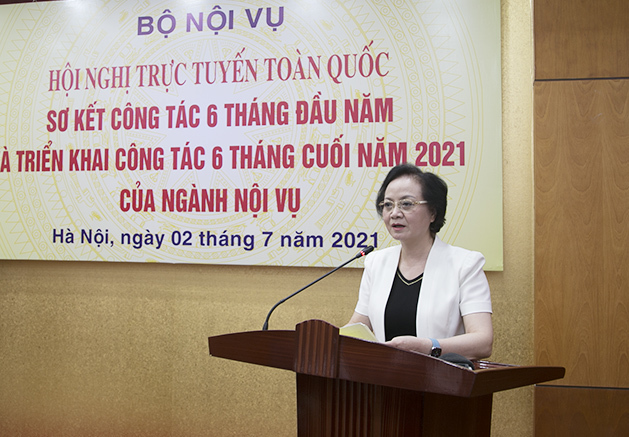 The outstanding achievement in the first six months of the year was that it gave advice and contributed positively to the success of the election of the 15th National Assembly’s Deputies and the People's Councils at all levels for the 2021-2026 term.

MHA gave advice to the Government and PM to promulgate many legal documents and important guiding documents.

The ministry took the initiative in proposing the removal of the requirement on compulsory certificates in foreign language and informatics skills, and the abolishment and reduction of requirements on certificates for professional titles.

MHA’s Chief Secretariat Vu Dang Minh said he has advised the Government’s Party Civil Affairs Committee to submit to the Politburo for approval the Government structuring project for the 2021-2026 term. This could be submittef to the 15th NA for consideration and approval at the first session.

On June 14, MHA officially submitted a report to the Government on the issue.

The ministry promulgated a circular guiding the functions, tasks and power of professional agencies at provincial and district levels, creating a legal basis for consolidating and reorganizing the apparatus in localities.

Some localities have actively implemented the rearrangement and streamlining of the organizational apparatus according to the Government’s new regulations, such as Ninh Thuan, Da Nang, Quang Tri, Quang Nam, Quang Binh, Son La, An Giang, Thua Thien Hue and Dak Nong.

However, many problems still exist. Some ministries still have not promulgated legal documents guiding the standards for civil servant titles and public employee professional titles in public non-business units.

The Ministry of Education and Training and Ministry of Health have been slow in amending the regulations on the limits on numbers of students and teachers per class at different education levels, the limits on medical workers per hospital bed, medical workers on population under the spirit of the Government Resolution 102 dated in 2020. The adjustments are necessary for the reasonable arrangement of number of officers working in public non-business units.

Also, the arrangement and reorganization of specialized agencies under the People's Committees of provinces, districts and public non-business units remains slow which has not achieved the goals and requirements of the 6th Central Resolution of the 12th term.

According to Tra, the rearrangement of the administrative apparatus and public non-business units remains slow and confusing. The units which are creative, flexible, dynamic, active and resolute can implement this well. Vice versa, the units which remain undetermined have been very slow in implementing the task.

Tra thinks that the state apparatus is still too cumbersome with too many levels of hierarchy and overlapping structure in ministries and ministerial-level agencies.

“In the time to come, we need to make a strong breakthrough in the arrangement of internal organization of ministries, ministerial-level agencies, public non-business units and administrative units,” Tra said, adding that if the number of units remains unchanged and cannot be reduced, the streamlining of apparatus can’t be implemented.

The reduction in number of units associated with personnel downsizing is a principle that must be focused on. In the immediate future, it is necessary to both focus on streamlining the units within ministries, branches, administrative units and public non-business units, and the management model, and promote autonomy and self-responsibility of the units.

The home affairs sector also plans to make a breakthrough in rearranging administrative units at district and commune levels.

Tra warned that the tasks of the home affairs sector in the coming time are very difficult, complicated and sensitive, which can be fulfilled with determination, effort, and creativity.

Therefore, the whole sector needs to closely follow the spirit of the Resolution of the 13th Party Congress and the Action Plan of the Government, MHA and localities to gather strength on renovating the content and methods of direction and administration.

"If we don't dare to think, dare to do, and dare to make breakthroughs, we will not be able to solve the huge problems that the Party, State and society are expecting us to solve," Tra said.

State apparatus and demands from life

Improving the state apparatus is an objective requirement that needs to be resolved soon.