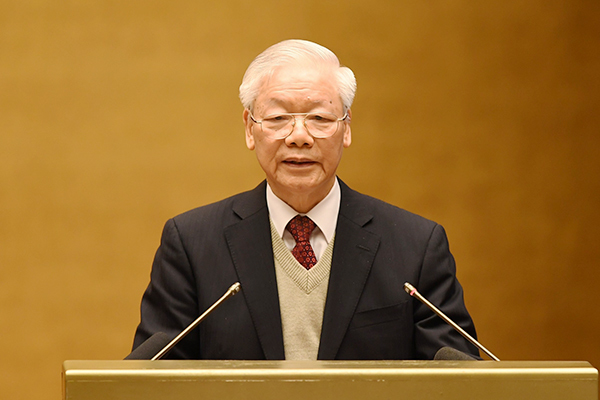 Trong said, during the ongoing National Cultural Conference to implement the 13th National Party Congress' Resolution on November 24, 2021 that culture can be understood in two senses: a broad sense and narrow one.

The conference is mostly discussing culture in the narrow sense of the word – the activities of a society, including education, science, literature, art, and morality (lifestyle, behaviors between people, etc).

“Culture means the cream, the quintessence, which generates the best, noble, most unique, humane, benevolent, and progressive values,” he said.

“Meanwhile, evils, despicable, cowardly, illegal, base actions are uncultured and countercultural,” he continued.

He emphasized that human happiness is not only having a lot of money, delicious food and good clothes, but also being rich in soul, living in the midst of love and compassion, kindness, reason and justice.

Trong recalled historical events and affirmed the significance and importance of culture in the nation and development.

The Party's awareness of developing culture in the doi moi (renovation) period has been gradually supplemented, becoming more comprehensive and profound.

Recalling the achievements, Trong said “there is every reason to be proud of the great achievements of the culture to the nation’s salvation and construction”.

Traditional cultural values and cultural heritage of the nation have been preserved and developed. Culture in politics and economy has been valued and promoted effectively.

The cultural industry and cultural market have prospered. Vietnamese people are gradually becoming the center of the socio-economic development strategy. The struggle, the criticism against the bad, the evil and the backward, against wrong views and behaviors that harm culture and lifestyle have been paid appropriate attention.

Despite the achievements, the Party Chief said it’s necessary to look realistically at the existing problems, shortcomings and inadequacies in the cultural field, and find solutions to settle them.

He said the cultural environment is still polluted with social evils, corruption and wrongdoings. The difference in cultural enjoyment between regions and areas is still large. The cultural heritage of the nation is in danger of being degraded, lost, and even destroyed.

The quality and quantity of cultural officers still cannot meet the requirements for cultural development in the new development period.

The introduction and promotion of Vietnamese culture overseas is not strong, while the reception of human’s “cultural quintessence” is still limited. Good cultural values have not received appropriate attention and there have not been active measures to preserve, protect and promote the values.

He stressed that the shortcomings have been slow to be settled though they are mentioned over and over again in many Party’s documents and resolutions. Meanwhile, the inadequacies have had adverse consequences to socio-economic development, human development and cultural environment.

The Party Chief put forward a series of solutions that need to be implemented seriously to continue building, preserving, and developing the nation's culture.

Building a healthy and civilized cultural environment associated with the uncompromising struggle with the bad, the evil, the uncultured behaviors and counterculture; and protecting the values of the true, the good and the beautiful.

He warned of gathering strength and focusing on economic development, while paying inappropriate attention to culture. He said it’s necessary to grasp thoroughly the view that culture must be put on par with the economy, politics and societal development.

The next solution is building and fostering a contingent of cultural officers, commensurate with the requirements and tasks of developing Vietnamese culture in the new period; and fixing the unsystematic style of work and arbitration in staff appointment at both the central and local levels.

It’s also necessary to pay special attention to training, fostering and building a contingent of intellectuals and artists doing cultural, literary and artistic work. Trong believes they can play an extremely important role in cultural development in particular and in the revolutionary career in general.

Trong said more attention must be paid to the preservation, embellishment and promotion of national cultural values, tangible and intangible cultural values of regions and nations, together with receiving the cultural quintessence of the times.

He emphasized that the tangible and intangible cultural heritage is an extremely valuable asset left by ancestors over thousands of years.

“If we don’t do that, we are guilty about history, and are repaying our ancestors and forefathers with ingratitude. Uncle Ho, before leaving, reminded us that ‘if you love your country, you must love folk songs’, Trong said, mentioning the moving song “Uncle Ho’s words before leaving”, a famous composition of the late musician Tran Hoan.

“I hope that our cultural work will be stronger and more effective after the conference, marking a new milestone on the path of Vietnam’s cultural development in the new period,” Trong said.

The Secretariat of the Party Central Committee will host the online National Cultural Conference with the participation of representatives of all 63 provinces and cities in the country and a number of ministries and state agencies on November 24.