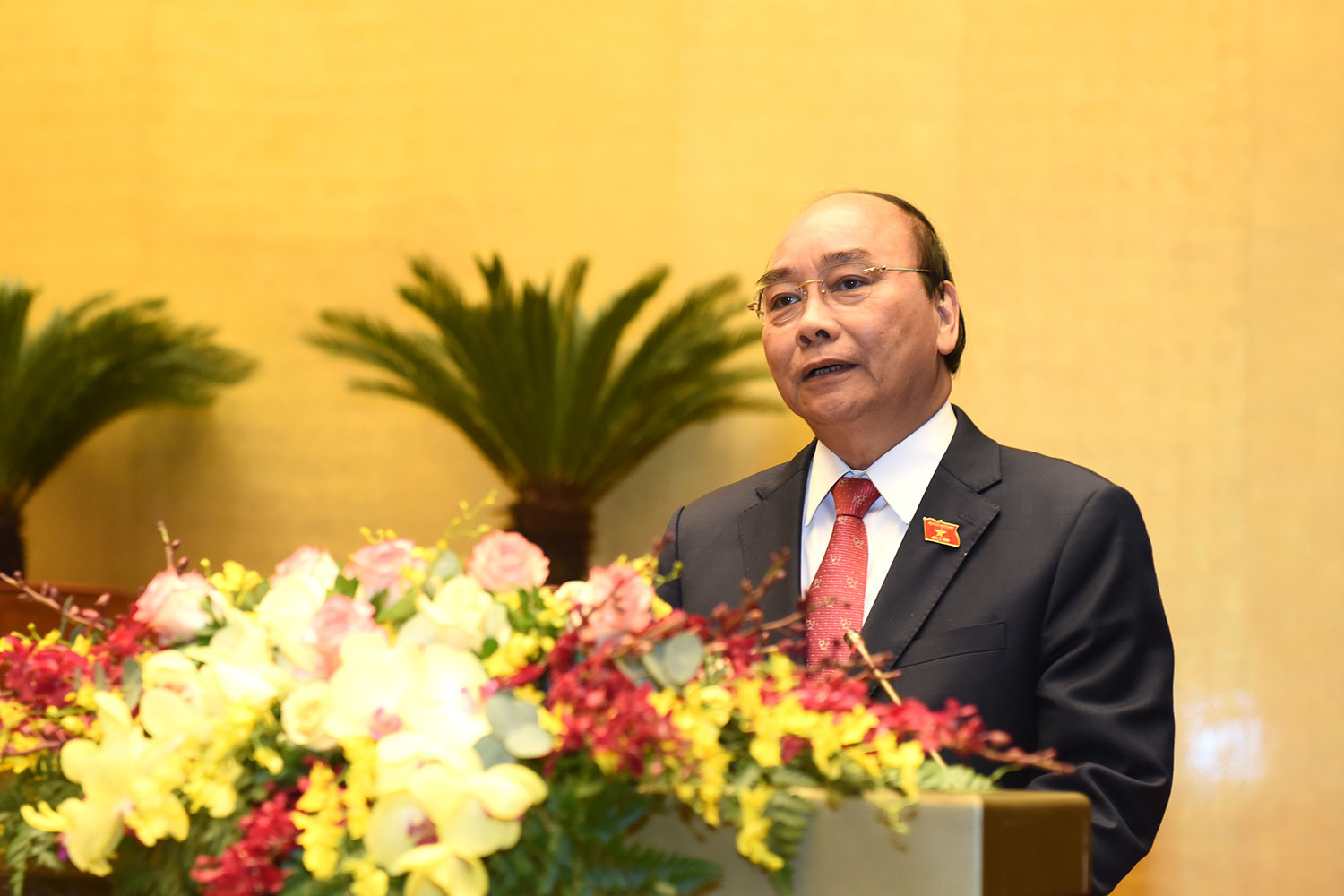 Reviewing the work implemented by the Government during its term on March 24, Prime Minister (PM) Nguyen Xuan Phuc said the ‘vessel’ of Vietnam had to experience a stormy journey with serious difficulties and challenges that went far beyond initial estimates.

With the motto ‘tectonic, upright government that acts drastically to serve people’, the Government and the PM directed all levels and branches to implement tasks and solutions in all fields.

The PM named three breakthroughs that the Government made in implementing strategies, which were made a high priority. The important breakthrough was perfecting the socialist-oriented market economy. The new points in the building and completion of laws need to be concise, easy to understand and easy to implement, leading to more effective enforcement.

In addition to the regular sessions, the Government had seven thematic sessions on law building.

The Government set up a taskforce in charge of checking legal documents to discover overlapping sections and contradictions in the documents to report to the National Assembly.

The third breakthrough was made in developing infrastructure so as to attract investment and develop different sectors, and improve growth quality. Many infrastructure works have been completed and put into use, enhancing the country’s capability and competitiveness.

The Government has been consistently striving to ensure macroeconomic stability, control inflation, ensure balance, and create a favorable environment to foster economic growth, considering this a key task in management and instruction.

PM Phuc said thanks to the accumulated income and improvements in fiscal space, especially during the four years of high growth rates of 2016-2019, Vietnam ‘hoarded assets’ that helped develop the economy and overcome difficulties caused by Covid-19.

In the context of the pandemic, the Government and PM seriously implement the tasks and solutions to ease difficulties for production and business, speed up disbursement for public investment, ensure social welfare and social order, and run the economy in the ‘new normal’.

“Though there are still many difficulties and challenges ahead in the path for development, we absolutely believe that Vietnam will soon become a country with higher than average income and join the group of developed countries with high income by 2045,” Phuc said.

The PM said Vietnam’s economy is recovering and in order to speed up, it is necessary to restructure the economy to make it more effective in every business field and branch, together with improvement in managing credit, fiscal and public investment resources.

The sea-borne economy made a breakthrough in development, in accordance with Vietnam’s national sea-borne sustainable development strategy by 2030 with a vision until 2045, in association with national defence, security and sovereignty protection.

The head of the Government affirmed that developing education and culture is promoting the ‘inner strength’ of the nation.

He believes that "we have made a lot of renovations in training, improving healthcare capability, developing preventive medicine and medical network, especially in Covid-19 prevention and control, and in the application of high technologies in health examination and treatment, hospital management".

Vietnam has obtained results in health insurance development (91 percent in 2020).

The renovation in communications in accordance with the national information strategy by 2025 have helped reach high consensus in society and enhanced people’s confidence.

Regarding the struggle against embezzlement, during the tenure, many cases were dealt with and large amounts of money and assets were seized. A special taskforce was set up to resolve the long-lasting complaints and denunciation cases.

Protecting social order, the peaceful life of all people, maintaining the sovereignty of the national territory, the integrity of every "inch of land" of the frontier, anf every "mile of sea" offshore is a sacred duty and lofty responsibility prioritized by the Government.

In foreign affairs and international relation, Vietnam has gained a high international reputation. It was elected to the UN National Security Council for the 2020-2021 term.

The results once more assert Vietnam’s voice and prestige, which has turned from a member strictly complying with the rules into a member participating in the process of setting new cooperation mechanisms.

Though gaining encouraging results, the Government admitted that there are still problems and shortcomings that need to be fixed.

The adjustment of the law and ordinance building program, and the supplementation, postponement and withdrawal of law building projects are needed. The quality of documents of some projects and legal document drafts still have not met the requirements.

Regarding socio-economic development, two out of 12 goals remain unattainable. The implementation of three focuses on the economic structure was below expectations.

Planning, infrastructure development land and urban management were loosened in some places. There are still problems in compiling and approving development plans, while water source planning has not been implemented well. The implementation of some key national projects is also slow.

The development of regional economies so as to create connectivity among localities is not commensurate with the potential. Pollution in industrial parks and craft villages has been slowly settled.

The state administrative apparatus has not been streamlined and or effective. The renovation of working styles and the improvement of cadres and civil servants’ quality has been uneven.

Regarding social order, bad information on social networks and the internet, ‘virtual’ mobile phone subscribers, phishing and spam messages have not been thoroughly handled. There are still ‘hot spots’ in security, criminals and drug trafficking.

Phuc said the Government needs to overcome risks and turn them from challenges to opportunities.