Vietnamese IT sector scrambling for staff

Demand for IT personnel is only growing as Vietnamese tech enterprises constantly expand their business scale. 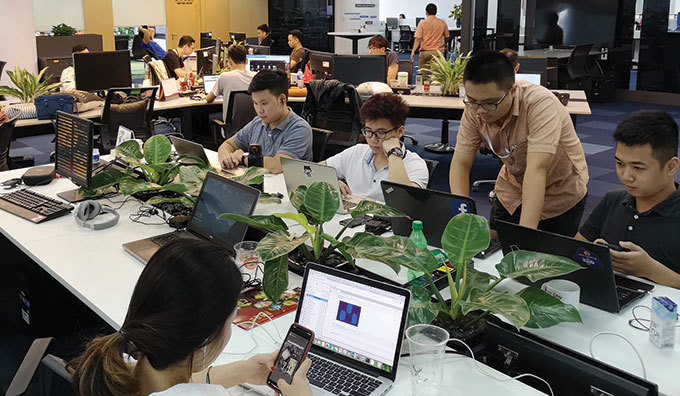 Local logistics provider Giao Hang Nhanh (GHN) has been seeking hundreds of tech candidates since the beginning of the year to meet its annual plan to double its growth.

“The technology platform we have helps us digitalize and manage operational systems as well as diversify every communication and connection channel to the customer, in order to advance productivity and efficiency in delivery speed.”

Starting as a tech-based startup, GHN has built a team of 100 high-quality tech employees. After seven years of operations, the company doubled its growth and now facilitates up to 300,000 nationwide orders every day.

“We continue to seek to double the number of personnel with double the skills compared to previous periods,” Ms. Trinh said.

Another mobile platform-oriented company, the 30Shine hair salon chain, has 20 information technology (IT) employees in both back-end and front-end positions, which is quite high for its business model.

The transfer of its operations system to a mobile platform this year requires the company recruit new personnel in its IT department. The system will help 2,500 barbers and members of other departments at the company serve 300,000 customers each month.

“Opening more hair salons around the country as well as in Southeast Asia in the upcoming time leads to increasing demand for IT human resources (HR) to develop the appropriate technology system,” said Mr. Bui Quang Hung, Marketing Director at 30Shine. After just four years in business, the chain has 72 salons around the country and plans reach 100 by the end of this year.

An increase in recruitment demand is also seen in local startups like Uiza and Cinnamon. Uiza, a provider of video and live stream cloud API platforms, plans to use its latest fund-raising tool Surge, a rapid scale-up program for startups in India and Southeast Asia created in April, to attract talented engineers to build products to serve the multi-billion-dollar market in video streaming software. It plans to recruit 15 engineers this year, doubling the current 16.

Cinnamon Inc., a Tokyo and Vietnam-based artificial intelligence (AI) startup, has seen its demand for IT HR double each year since 2016. It now has 100 highly-skilled Vietnamese AI researchers and 20 software engineers in Vietnam, Japan, and Taiwan (China).

The startup will develop 200 engineers in researching and developing high technology by the end of this year to meet its expansion plans.

According to Navigos Search, the IT industry is always among the top 10 in terms of recruiting needs but is not in the top 10 industries with high growth in labor supply.

There are differences in demand and supply of IT HR and there will be a shortage of personnel in the field. Because of this disparity, businesses in the market need to compete heavily in the race to recruit and retain talent.

There are greater challenges for employers looking to expand their IT workforce, Mr. Do Ngoc Hoang, Workforce Assurance Director at FPT Software, told VET.

The boom of creative startups in the technology sector is only getting stronger, especially following major investments being made in tech startups. Traditional businesses in sectors like tourism, agriculture, and real estate are all shifting towards digital transformation.

As the logistics industry is still quite new in Vietnam, GHN’s efforts to recruit tech engineers has been problematic over recent years. The majority of tech talent don’t view the field as attractive because they still prefer other fields such as developing and publishing online games, e-commerce, consumer finance, and outsourcing for foreign companies.

“Young talent often see SCommerce, GHN, and AhaMove as well-known names in the startup community but tech engineers are mistaken when they think that there is not enough space for tech talent to apply new and advanced technologies in the e-logistics business,” said Ms. Trinh.

“We both focus on running the business and having to think of ways to bring the story of our industry to young people who are passionate about career development in the field of technology.”

Like other tech companies and startups, Cinnamon is also facing a challenging time in attracting and retaining IT talent. “We have faced many difficulties, especially in a competitive market in Vietnam and also in Southeast Asia, Europe, and the US,” said Ms. Do Thi Ngoc Mai, HR Manager at Cinnamon.

“Everyone is fighting for the top AI researchers. Our competitors are becoming more and more aggressive. Many emerging overseas AI startups have entered the market and major corporations also want to invest in AI. Rapidly-rising demand runs up against falling supply. Some companies are even willing to pay double or triple the salary to secure talent.” Many of its employees have considered working aboard.

According to its research, the rate of job-hopping in the IT industry is quite high, Ms. Nguyen Phuong Mai, Managing Director of Navigos Search, said. Salary is the main reason why people change jobs, at more than 50 per cent, according to one of its surveys.

This may be seen as a strength of large companies in the market, but salary is not always the determining factor.

FPT Software has recently been facing to attrition rate. “The way to handle and overcome it is strengthening our company’s job value to attract those who have a long-term career plan and open more onsite opportunities for talent,” he added.

“The retention policies for key performers are important to maintain the workforce structure for our development.”

AgileTech, a Vietnamese quality outsourcing company in websites / mobile apps, blockchain services, and AI - big data services, spends much time and money on training new IT employees but then often loses them.

To engage its talent, the company continues to offer many retention policies, including training courses and higher salaries and bonuses, according to Mr. Thang Nguyen, CEO of AgileTech.

“Many IT talent prefer to work for startups like us rather than for big tech corporations, despite the less competitive salary,” he believes.

Uiza, meanwhile, is seeking talent who are interested the video streaming field and are suitable with its corporate culture to meet the demand for developing international markets next year.

It will not offer a competitive salary like major corporations to compete and retain talent, according to CFO Ms. Jenny Bui.

According to TopDev, people also consider a good company or a good working environment to be based on the training and technology they are given to learn and work on interesting projects.

Cinnamon aims to build a good foundation to support the robust growth of its employees.

“In the next couple of months we are planning to launch the 5th AI Intelligence program or the second boot camp to develop the AI community and raise the quality of AI talent in Vietnam at both junior and senior levels to be able to compete at the global level,” Ms. Mai said.

Cinnamon’s ambition is to build a top tier AI hub in Asia-Pacific, starting with Vietnam, which will be the model, and then Taiwan (China) and maybe elsewhere.

According to the 2019 Vietnam Salary Guide conducted by Adecco Vietnam, fintech, blockchain, and AI are the trends set to shape the technology recruitment market in 2019, with emerging demand for skilled talent across platforms.

As both product and outsourced companies increase their workforce, Python, Net, and Java skills are in high demand. This will be a new era for software engineers who have mastered the tools for blockchain development, according to Mr. Chuong Nguyen, HR, Legal, Technology & Media Manager, at Adecco Vietnam. VN Economic Times

A workshop organized in HCM City, attracting representatives of 200 SMEs, in late September was held to help Vietnamese SMEs boost exports through transnational e-commerce, as well as help Vietnamese enterprises connect with Singaporean ones.

Cybersecurity emergency response centre to be operational next month

The Vietnam Cybersecurity Emergency Response Teams/Coordination Centre (VNCERT/CC) will be put into official operation from November 1 under the management of the Ministry of Information and Communications.