Volunteers for vaccine trial: if people are overcome by fear, the vaccines won’t succeed

The woman is a secondary school teacher of English in Hanoi, the mother of two children and chair of a volunteers’ club which helps patients. 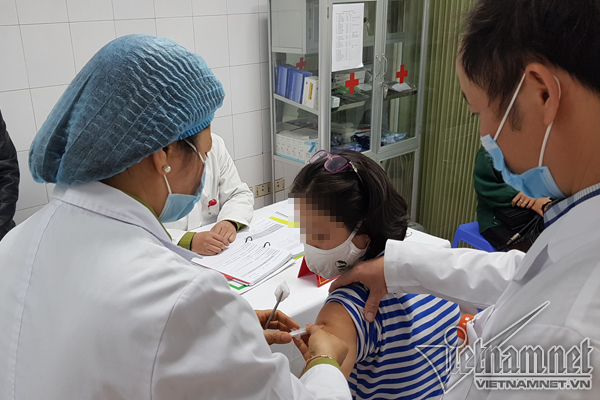 The female teacher gets the second injection

On January 14, she and the other first two volunteers received the second shot of 25mcg dose of Nanocovax. The three, one male and two males, are in good condition and are being watched over at their homes.

The female teacher said she registered to become a volunteer for Nanocovax vaccine trial on the first days.

On December 17, 2020, when the plan to inject three first volunteers, two males and one female was announced, she thought she would have to wait until the next injection campaign. However, in the last minute, a male volunteer could not meet the requirements to get the injection and she was chosen to replace him.

After the first injection, her health conditions were quite normal, with no side effects.

“As I participated in the injection campaign with a strong belief in the success of vaccine, my resistance becomes stronger. I feel very well,” she joked.

She said she did not think much before the registration. She has participated in the Youth Union’s movements over the last 27 years and the spirit of ‘devoting and living for the community’ is in her blood.

She realized that most of the registered volunteers were students. But vaccines need to be tried on people at different ages. She wanted to become part of the research, representing people aged 40-50.

The third reason that urged her to become volunteer was that 97 million Vietnamese people are awaiting vaccines to be able to stabilize their lives. However, if there is no volunteer, there won’t be a vaccine.

When she talked about becoming a volunteer, she faced opposition from relatives and friends.

However, she understands that Vietnam’s Nanocovax vaccine is different from the vaccine of other pharmacy firms.

“I believe that Vietnam’s vaccine production technology is safer. I have a strong belief in myself. I believe the vaccine will succeed in my body. And I accept the risks,” she said.

She did not tell her parents, because she did not want them to be worried about her.

The images of Deputy Prime Minister Vu Duc Dam visiting the three volunteers at the hospital were shown on national television. Her parents watched the program and saw the images, but did not recognize their daughter.

Besides her parents, she also kept it a secret from her two children, who are studying overseas. About 72 hours after the injection, she called the children and informed them.

“I told them that I got the vaccine injection trial and I am safe. After I explained to them, they began encouraging mom,” she said.

After three days of being watched over at the Military Medicine Academy, she returned to her teaching work.

“My students said they recognized me when looking at me from behind, because I often put glasses on my hair. I was so touched,” she said.

A lot of students’ parents messaged her and encouraged her. Her retired colleagues said thanks to volunteers many people can be saved.

During the talk with reporters, she repeatedly said that she decided to become a volunteer not to become famous, as no one would exchange their life for vainglory.

Besides the female teacher, two other volunteers, medical university students, one female and one male, also got the second injection on January 14.

The male student said he wanted to contribute to the country’s fight against the pandemic. He was encouraged by family members.

After the first injection, the young man had a mild fever with a temperature of 37-37.2oC on the first day. But he was not worried because he understood this was a normal reaction of the body.

The female student got a mild fever for the first several hours after the injection.

The volunteers are watched over after they return home. They are asked to go to bed early, not to drink alcohol and beer, or smoke, or use stimulants and coffee.

On the seventh, 14th and 21st after the injection, volunteers go to the Military Medical Academy to have blood samples taken for testing the vaccine’s immunogenicity.

Dr Ho Anh Son from the academy said the first injection has created a good immune response. After the second injection, the antibody content will continue to increase by 4-5 times, or even 20 times.

Nanocovax is a Covid-19 vaccine developed by HCM City-based Nanogen Pharmaceutical Biotechnology JSC. Vietnam plans to test the vaccine on 10,000-30,000 people in the third phase of the vaccine clinical trial.

A COVID-19 vaccine developed by the Institute of Vaccines and Medical Biologicals in Khanh Hoa province has returned positive initial results.

A group of three volunteers are set to receive the first shot of a 75mcg dose of the Nanocovax vaccine on January 18, the highest quantity of the vaccine which will be trialed on participants.