A researcher on renewable energy, Dr Vo Viet Cuong, from the Electrical and Electronic Engineering Faculty under the HCM City University of Technology and Education, has noted that there is no absolutely clean energy.

Solar power is considered clean energy as it can reduce the emission factor by 90 percent compared with traditional energy. 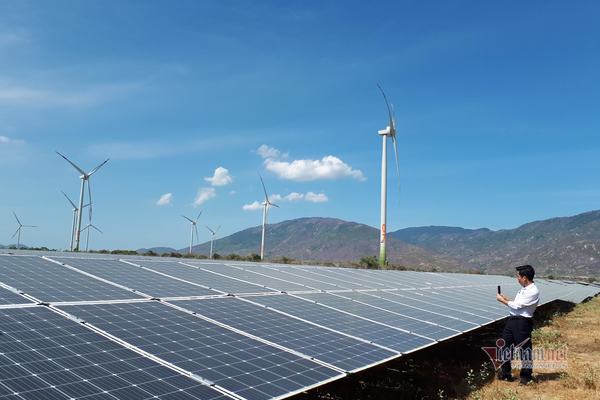 Regarding the treatment of solar panels after they expire, Cuong said European countries have set clear regulations to make the collection of dead solar panels compulsory.

They have to send detailed reports to watchdog agencies about the quantity and types of electrical and electronic equipment on the market, prepared for reuse, recycling and recovery.

“There are enough technologies to recycle and treat the things created by science. The laws make it clear that the creators of products have the responsibility of collecting products after use,” he said.

Like other countries, when developing solar power, Vietnam needs to think about how to treat solar panels when their life cycle ends.

Cuong said solar power will still produce CO2. His calculations show that the emission factor of the Vietnam’s power sector is 120-130 grams of carbon per kwh.

As for solar power (the emissions from raw material exploitation, solar panel production and recycling), the figure is 10 grams of carbon per kwh. As such, when using solar power, Vietnam would be able to reduce at least 90 percent of the volume of emissions compared with traditional energy.

In Asia, Japan and South Korea are ahead of Vietnam in solar power development. In South Korea, the Ministry of Trade, Industry and Energy in 2017 established a PV module waste recycling facility in Chung cheong province.

In the US and Malaysia, First Solar factories have been established using the recycling method which recovers 95 percent of Cd and 90 percent of glass.

According to Cuong, the solar panel recycling plants are running at just 4-14 percent of the installation capacity. The capacity is low because solar power has just started booming, while demand will increase sharply after 20 years, when solar panels start to die.

In Vietnam, solar power has developed for two years. However, the question about how to treat dead solar panels has been raised, which shows awareness about environmental protection. Vietnam will be able to take the initiative in dealing with the dark side of solar energy.

The regulations related to the treatment of dead solar panels can be found in the Ministry of Industry and Trade’s Circular 18/2020.

The circular stipulates that during the operation, or when the on-grid solar power projects and rooftop solar systems terminate, the sellers of electricity have the responsibility of collecting, dismantling and returning the premises, and they have to handle all the materials and equipment of the solar power works in accordance with the laws.

Some analysts commented that the regulation is not clear enough and has no binding force.

In reply, Hoang Tien Dung, director of the Electricity and Renewable Energy Authority, said the circular stipulates that the investors of solar power works are responsible for collecting and treating waste solar panels.

The circular doesn’t mention the sanctions on subjects who don’t obey the regulations, but according to Dung, the sanctions are mentioned in the decrees that guide the implementation of the Construction Law.

The decrees stipulate that when works (including solar power or hydropower works) expire, investors have the responsibility of dismantling and treating the premises.

Stressing that investors must be responsible for their works, he said the role of the state is building a legal framework for enterprises to observe, and the state will not come forward and do all things.

This means that it is impossible to require investors to pay money in advance, so that the State later will have money to treat expired solar panels as suggested.

He went on to say that he has met some enterprises which want to invest in solar panel recycling. However, the market is still very small.

“It will be a good business field in the future, when the market becomes bigger,” he said.