Vietnam boasts many impressive tourist destinations, of which Phu Quoc island, Sa pa tourist resort, Can Tho city, Hoi An ancient town, and Da Nang city are worth visiting and gaining experience.

Phu Quoc is famous for beautiful beaches and is an ideal destination for foreigners. 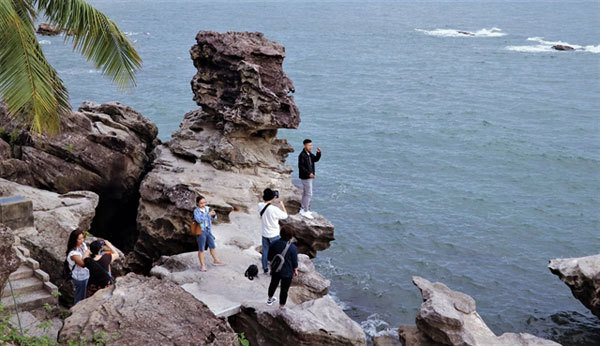 Considered the largest and most beautiful pearl island in Vietnam, Phu Quoc island district is surrounded by 22 islands of different sizes, creating a wonderful natural complex in the south.

Covering an area of less than 10km², Hon Thom has in recent years emerged as a favourite destination for many local and foreign tourists.

If you want to discover a mountain life with distinctive customs of indigenous ethnic groups, Sa Pa resort town is a must-visit destination.

Located in the northwestern part of Vietnam, Sa Pa town is 1,600 meters above sea level and about 376km from Hanoi. It is home to several ethnic minority groups such as H’Mong, Dao, Giay, Xa Pho and Tay.

Surrounded by the Hoang Lien Son Mountain Range, the climate in Sa Pa is unique in Vietnam, subtropical in the summer and temperate during the winter.

September or October is the right time for visitors to explore beautiful terraced fields during the ripening rice season. In addition, Sa Pa is also a suitable place for visitors who enjoy walking, cycling and mountain climbing along others.

Last July, Sa Pa was honored to be one of the Top 14 emerging destinations in Asia voted by TripsToDiscover.

Located in the south, Can Tho is the fourth largest city in Vietnam and the largest city in the Mekong Delta. It is noted for floating markets, rice-paper making villages, fruit gardens, and crisscrossed picturesque rural canals.

Like many localities in southern Vietnam, Can Tho has rainy and dry seasons in a year, with the former lasting from May to November and the latter from December to April. However, the ideal time to make a holiday locally is between April and June when temperatures are moderate and the rainy season is not infull swing yet.

It wrote: Located in central Vietnam on the coast of the East Vietnam Sea, Hoi An is a charming city with ancient roots, distinct architecture, a contagious energy, and arguably one of the best street food scenes on the planet. Most importantly, Hoi An is home to friendly people who are eager to share the best their city has to offer.

Hoi An has been recognized as the World Cultural Heritage Site by UNESCO since 1999. According to UNESCO, the ancient town is an exceptionally well-preserved example of a South-East Asian trading port dating from the 15th to the 19th century. Its buildings and its streets reflect the influences, both indigenous and foreign, that have combined to produce this unique heritage site.

Located in central Vietnam, the coastal city is known for its sandy beaches and history as a French colonial port.

In addition to beautiful beaches, Da Nang houses the Son Tra peninsula where endangered red shanked douc langur, one of the world's most striking primates, live. Holidaymakers can visit Cham Museum of Scupture which is home to the largest collection of Cham sculpture in the world.

Visitors can also explore Marble Mountains, a collection of five outcrops topped with atmospheric pagodas, Ba Na Hills, a record breaking 5km cable car at an altitude of 1,300m above sea level, Hai Van Pass, one of the finest stretches of coastal road in Vietnam, UNESCO-recognised My Son Sanctuary or Lang Co lagoon.

The best months to visit Da Nang are from March to May and September to October, when the weather is warm. June - August is prime time for local tourists as it is rather hot then, but it has little rain while the sea is clear and calm.

Many tourists are impressed by the city’s beauty and people’s friendliness and said Da Nang is one of the few destinations in Vietnam where they will return one day.

New central square to be built on Phu Quoc

The People’s Committee of Kien Giang has approved a project to build a new central square in the island district of Phu Quoc.