In the joint communiqué, some ministers voiced concerns on the land reclamations, activities, serious incidents in the area, including damage to the marine environment, which have eroded trust and confidence, increased tensions, and may undermine peace, security, and stability in the region.

“We reaffirmed the need to enhance mutual trust and confidence, exercise self-restraint in the conduct of activities that would complicate or escalate disputesand affect peace and stability, and avoid actions that may furthercomplicate the situation,” they said.

The meeting further reaffirmed the need to pursue peaceful resolution of disputes in accordance with the universally recognised principles of international law, including the 1982 UN Convention on the Law of the Sea (1982 UNCLOS).

“We emphasised the importance of non-militarisation and self-restraint in the conduct of all activities by claimants and all other states, including those mentioned in the 2002 Declaration on the Conductof Parties in the South China Sea (DOC) that could further complicate the situation and escalate tensions in the South China Sea,” the ministers said.

They also reaffirmed the importance of maintaining and promoting peace, security, stability, safety, and freedom of navigation in and overflight above the East Sea and underscored the importance of the full and effective implementation of the DOC in its entirety.

“We warmly welcomed the continuously improving cooperation between ASEAN and China, and were encouraged by the progress of the substantive negotiations towards the early conclusion of an effectiveand substantive Code of Conduct in the South China Sea (COC) consistent with international law, including the 1982 UNCLOS, within a mutually-agreed timeline,” they sated.

The meeting welcomed the resumption of textual negotiations on the Single Draft COC Negotiating Text (SDNT), which has resulted in provisional agreement on the Preamble section after delays due to the COVID-19 pandemic.

The ministers emphasised the need to maintain and promote an environment conducive to the COC negotiations, and thus welcomed practical measures that could reduce tensions and the risk of accidents, misunderstandings and miscalculation. 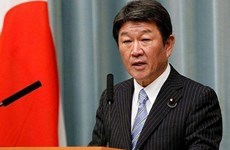 As part of the training programme at sea in the first phase of 2021, the Navy Region 2 Command organises K2 training with live ammunition firing, and instructs units of the Naval Region 2 on how to coordinate with each other.

The High Command of the Vietnam Coast Guard Region 1 has successfully organized a 2021 training on tactics and gun and artillery shooting at sea in the Gulf of Tonkin.

Some of the islands on the Truong Sa archipelago now have ship locks, which are thought of as “common houses” in the middle of the sea that help fishermen avoid storms and also provide fisheries logistics services.