COVID-19: The military will serve the nation and the people, no matter what hardship

Major General Nguyen Van Tin, deputy head of the Ministry of Defence’s Department of Political Information and Training, talked about the military’s efforts in the fight against COVID-19.

During this hard time as the COVID-19 pandemic continues to spread, the Vietnam People’s Army has shown its resilient spirit in the face of hardship and together with all levels of the government, reaffirmed its commitment to suppressing the pandemic. What can you say about the fighting spirit of the army in recent days?

A for-the-people military that is willing to sacrifice everything to serve the people is now on full display. The Vietnamese military’s biggest duty currently is managing all the concentrated quarantine camps in the country, even including hotels and schools that have been repurposed for this role.

Our soldiers have given up their bunkers and shelters to accommodate people who have to be quarantined. All the health ministry’s regulations on prevention and combating the disease are being rigorously observed, from the distance between beds, to keeping hygiene and frequent disinfection. The standard meals for quarantined citizens are of better quality and more fulfilling than the meals served to our infantry forces. All there is to say is that the Vietnamese people have nothing to be concerned about in this “battle” against COVID-19, and the country is determined not leave anyone behind.

Serving thousands of people in quarantine is by no means easy. The quarantine period lasts only 14 days, so once it ends, people can go home, but our military members still need to prepare and take care of the next batches. Human strength and endurance is not unlimited. Their work starts from the break of dawn – preparing and cooking three full meals for the quarantined, and then they will need to tend to everyone’s little needs like going out to buy a mobile top-up cards or finding hot milk for an infant in the middle of the night. Our men serving in the quarantine sites are truly dedicated soldiers, silently making sacrifices and trying their hardest to carry out their duties.

The role of the military also lies in patrolling the country’s borders, checkpoints and pathways. I can confidently say that the military has been effectively maintaining control over who gets to cross the border into Vietnam.

Military medical teams are also always ready to carry out tests, screenings and treatment. So far, the country has about 45 mobile medical teams dedicated to COVID-19 testing and treatment, of which, 20 are military-run, and they are all well-trained and highly responsible.

The image of medical doctors and military members working within the country’s COVID-19 hot spots are a great source of assurance to the public. For example, a military medical mobile team from the 2nd Military Region Command was deployed to deal with the situation in Son Loi Commune of Vinh Phuc Province, the first area in the country to be placed under total lockdown after multiple COVID-19 patients were found related to a group of trainees returning from Wuhan, China.

Regarding science and technology research, the Vietnam Military Medical University had successfully produced test kits that can detect with high accuracy and consistency the presence of the SARS-CoV-2, on par with imported test kits.

The military’s chemical unit is highly developed and professional and has been involved in several disinfectant efforts in virus-hit areas of the country, bringing peace of mind to the general public.

The military has also been proactive in its communication and efforts to fight against toxic content and fake news on the internet regarding COVID-19.

The pandemic in Vietnam is said to be entering its “second phase” and widespread outbreaks could be possible if it is not contained properly, not to mention the risks of infections among the military when the number of confirmed positive cases in quarantine sites is rising. What is the military’s plan to deal with this situation?

The second phase is seen as more dangerous and complicated now the pandemic has gone global, rather than when the epicentre remained mostly in Wuhan, China.

The defence ministry is fully aware of the new situation and has asked the army to plan for worst-case scenarios. It’s in our nature and traditions, we always need to be training all the time, projecting worst-case scenarios and forming all sorts of plan for different forecasts, and this way of thinking and working is even more fitting given the current developments of COVID-19.

The defence ministry asserted that the military will lead the fight no matter what the scenario, and remain committed to ensuring – to the fullest of our capacity – sufficient human resources, infrastructure and facilities – to combat the disease.

Units assigned with quarantine and heath supervision missions must thoroughly grasp and comply with the regulations of the State and the defence ministry. Continuing to promote the virtues of Uncle Ho’s army, the tradition of solidarity and altruism, while at the same time strictly observing and effectively implementing anti-epidemic measures and taking good care of the accommodation for quarantined people.

The military medical force will continue to review, consolidate and supplement their human resources, supplies and medical equipment to be ready to cope with different levels of the epidemic, coordinating with competent authorities in preventing, zoning, and suppressing outbreaks, preventing the epidemic from spreading among the military’s agencies and units, and ensuring the health of the soldiers and the public.

How do you envision the day we can finally declare victory against the pandemic?

It would certainly be a joyful one. It would not be just a victory against the disease, but also one against ourselves. I don’t think that our military personnel at first could imagine the level of hardship and difficulty in serving the people, but after so much education, training and enriching experiences and adaptation, they have overcome their own limitations to carry out their duties.

The world is seeing drastically rising numbers of cases and deaths – even among highly developed nations, while Vietnam continues to limit the spread.

With the people’s support for the Government’s efforts, with capable leadership, with proficient co-ordination and responsible actions, we will certainly be able to defeat COVID-19.

For the military, I want to reiterate that no matter what hardship or difficulty, the military will be there to serve the nation and the people. VNS/VGP

The army will develop a COVID-19 prevention and control plan based on a scenario for the outbreak at five levels in a bid to effectively deal with the epidemic, said Deputy Minister of National Defence Sen. Lieut. Gen. Tran Don.

Prime Minister Nguyen Xuan Phuc has praised the military and public security forces for their great efforts in the fight against COVID-19. 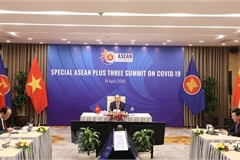