Freedom of belief and religion respected in Vietnam

Although hostile forces against the Vietnamese Party and State always distort that religion is oppressed in Vietnam, legal religious activities are respected in Vietnam and practiced nationwide. 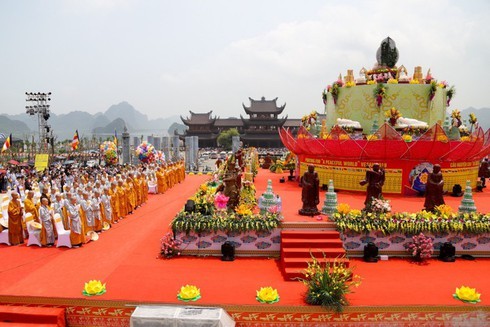 More than 95% of Vietnamese people hold some religious belief and more than 27% or 24.3 million people are religious followers. There are 53,000 religious dignitaries and 28,000 establishments of worship. These figures are evidence of the openness in Vietnam’s policies on ensuring freedom of religion and belief.

They also reflect the Vietnamese Party, State, and government’s commitment to promoting a law-governed state for religion. Religious activities are practiced nationwide in diverse forms.

According to Do Quang Hung, head of the Religion Advisory Council of the Vietnam Fatherland Front, religion, belief, and spirits are the three pillars of Vietnamese people’s spiritual life.

Hung further elaborated that Vietnam has also promoted religious activities of foreigners in the country in the last 7-8 years.

"I think it’s a positive move of the Vietnamese State. Foreigners not only practice religion in places of worship, they can also have their own places, or rent places for practicing their religion," he said. "In addition, Vietnamese religious organizations have also enhanced international cooperation. Vietnamese religious people have travelled overseas for medical treatment and participate in religious activities overseas."

The law has three major changes, according to Hung. First, the people’s right to freedom of religion and belief are better ensured in line with international treaties, Second, the law addresses a series of issues concerning places of worship, land, religious property, and even publication and information issues.

Freedom of religion and belief has been one of the issues that hostile forces take advantage of to intervene into Vietnam’s internal affairs. But the reality of religious practices and activities in the country is a strong response to distortions.

Vietnam affirmed its support for a comprehensive peace process led by Afghans during the UN Security Council’s virtual meeting on September 3 on the situation in Afghanistan and the operation of the UN Assistance Mission in Afghanistan.

The entirety of the Burj Khalifa, the tallest tower in the world, in Dubai of the United Arab Emirates (UAE) appeared brilliantly lit up by the Vietnamese national flag on the night of September 2.

Ambassador Dang Dinh Quy, head of the permanent Vietnamese mission to the UN, has called on relevant parties in Libya to soon resume peace negotiations. ​

The Standing Board of the People’s Council of Hanoi has decided to suspend the duty and power of a deputy of the 15th municipal People’s Council (2016-2021 tenure) of Hanoi Mayor Nguyen Duc Chung after Chung was prosecuted.