and promotion of the Regional Comprehensive Economic Partnership (RCEP).

In a recent interview granted to Vietnam News Agency, Prof. Jemadu, former Dean of Political and Social Sciences at Indonesia’s Pelita Harapan University, said it is time for ASEAN to coordinate policies to cope with and drive COVID-19 out of Southeast Asia.

He suggested that ASEAN leaders should have coordination policies at the regional level and share the best practices to deal with the pandemic crisis while restoring economy; improving trade, investment and tourism in the region.

With success in the fight against COVID-19, Vietnam could share its experience with other ASEAN member states, he said.

In face of the complicated developments in the East Sea, he said ASEAN needs to strengthen its diplomatic policies with China and persuade the country to speed up negotiations on a Code of Conduct in the East Sea (COC), so as to prevent acts of escalation and unnecessary use of violence in the sea.

The scholar also expected ASEAN to continue maintaining its solidarity and spotlighting its central role in dealing with issues related to regional stability in the East Sea.

As regional economy slowed down due to COVID-19, he suggested ASEAN step up RCEP talks and persuade India to join the deal to “leave no one behind” in inter-regional economic integration and cooperation process.

He believed that Vietnam is in the best position to uphold the role of ASEAN leadership in this decisive time.

All ASEAN countries expect Vietnam to effectively play its role in uniting ASEAN and prioritising the promotion of ASEAN’s central role during its tenure as ASEAN Chair 2020, he said./.VNA 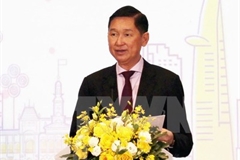