The PM also affirmed to facilitate the development of the bilateral national defence cooperation, and said Vietnam welcomes Japan’s active contributions to and support its greater role in maintaining peace, stability and development in the region and the world as a whole.

He thanked Japan for providing Vietnam with over 3 million doses of vaccines against the COVID-19 pandemic and facilitating Vietnamese working and living in Japan, and asked the country to help Vietnam with vaccines.

PM Chinh asked the Japanese side to continue providing Vietnam with new ODA projects, and pledged Vietnam will continue creating a transparent and favourable environment for investment by foreign countries, including Japanese ones.

The Japanese minister spoke highly of the Vietnam Government’s efforts in the fight against the pandemic and affirmed he will ask relevant authorities to continue the vaccine assistance to Vietnam.
Japan will continue cooperating with Vietnam in the field of Vietnam’s priority, he said.

They exchanged ideas on international and regional issues. On those on the sea, including the East Sea and the East China Sea, PM Chinh affirmed Vietnam’s viewpoint of maintaining peace, stability, security, safety and freedom of navigation and aviation, settling disputes and differences in the sea by peaceful measures on the basis of respect to international law, including the United Nations Convention on the Law of the Sea in 1982.

Vietnam supported the process of peace and denuclearisation of the Korean Peninsular, while the Japanese side affirmed support to ASEAN efforts on the issue of Myanmar./. 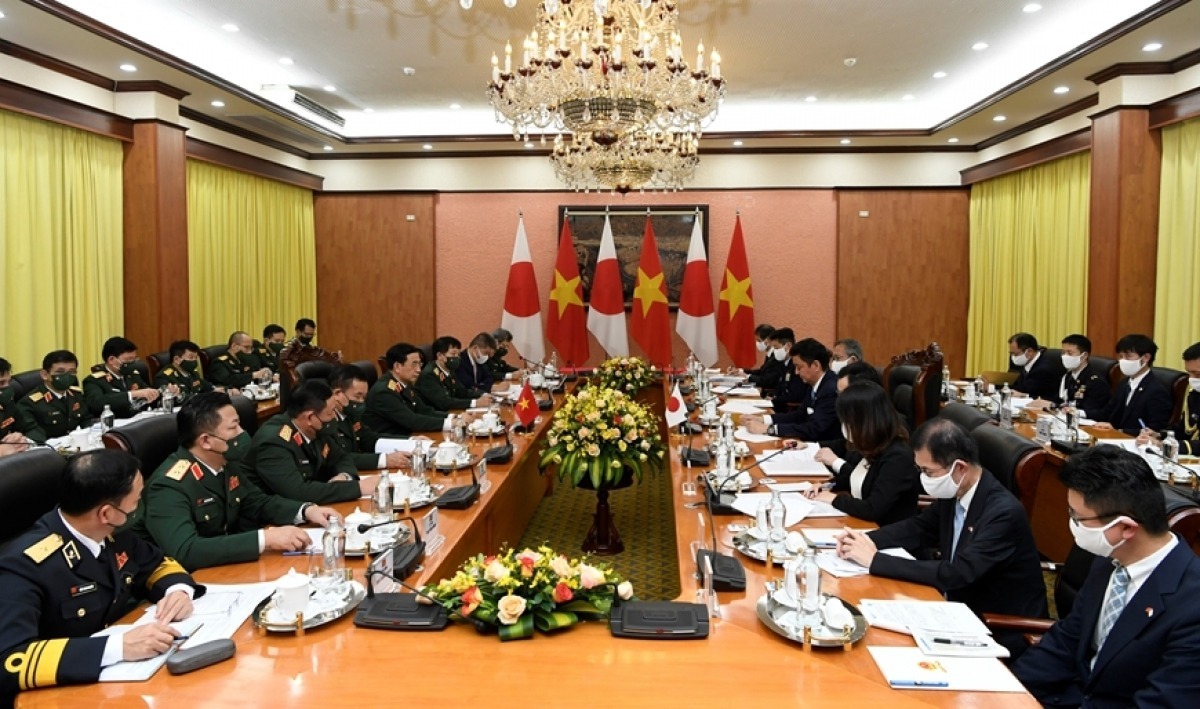 The two ministers stress the need to strengthen defence cooperation amid complicated developments taking place in the region, during their talks in Hanoi.(Photo: qdnd.vn)

The two ministers reviewed defence cooperation between Vietnam and Japan in recent times, including the fight against COVID-19, and exchanged views on regional and international issues of mutual concern.

They stressed the importance of maintaining freedom of navigation and overflight in the face of complicated developments taking place in the region, and reaffirmed the necessity of complying with international law, including the 1982 United Nations Convention on the Law of the Sea (UNCLOS 1982).

On bilateral ties, the two sides agreed they will direct their relevant agencies to coordinate closely to soon sign an MoU on cooperation in military medicine and cyber security. They will strengthen the exchange of high-level delegations, maintain defense policy dialogues and consultations, boost cooperation in personnel training, defense industry, as well as in overcoming war consequences and participating in UN peacekeeping missions.

The two sides will work closely together to effectively implement cooperation programmes in multilateral cooperation mechanisms, especially the ASEAN Regional Forum (ARF), and the ASEAN Defense Ministers Meeting Plus (ADMM+), as well as cybersecurity cooperation between Japan and ASEAN.

After the talks, Minister Phan Van Giang and Minister Kishi Nobuo witnessed the signing of an agreement on transfer of defense equipment and technology between Vietnam and Japan.

Minister Kishi Nobuo is paying an official visit to Vietnam at the invitation of his Vietnamese counterpart General Phan Van Giang.

Vietnam is the first country Minister Kishi Nobuo has selected to visit after he took office in September 2020 under the Suga government.