Auditor General Ho Duc Pho told National Assembly (NA) deputies “not to worry not too much” about leakages when electronic data of the audited organisations and individuals become readily accessible by the State Audit of Vietnam. 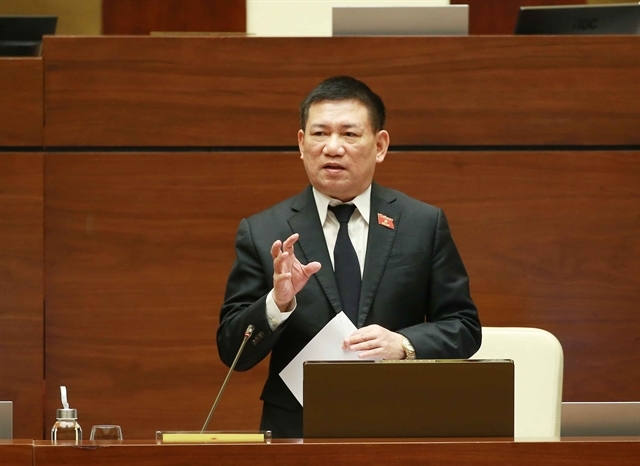 Auditor GeneralHồ Đức Phớc presented the report on the amended law on State Audit to the National Assembly on Friday in Hà Nội.

The leader of the State Audit Office of Việt Nam made the remark to the NA during the legislation’s ongoing 8th session in Hà Nội on Friday as he presented a report on the draft amended Law on State audit, which includes a controversial item that aims to aid auditing agencies but has also sparked data protection concerns.

In the age of Industry 4.0 when businesses and agencies have started to implement electronic payments, the State Audit needs to expand the scope of data it accesses instead of relying on physical copies of invoices, bills and other documents, said Phớc.

Also according to the State Audit, the amendment also falls in line with the recommendations from the International Organisations of Supreme Audit Institutions (INTOSAI) and international practices.

Working on electronic records can also help save time and increase accuracy in the auditing process, he added.

Obtaining data will not only help in the auditing of individual cases but will also enrich the State Audit’s own databases, to allow the agency to make forecasts on possible risks to public finance and investment and the macroeconomy.

Nguyễn Đức Hải, chair of NA Finance and Budget Committee, tasked with assessing the amended draft law, said within the national information databases or the database of audited organisations’ and individuals contain many kinds of information – including State secrets and personal information – so there must be a clear scheme to determine those who can access what and to what degree and this activity must be monitored.

Phớc said access to electronic records – as well as which types of data would be audited and the duration data can be accessed by the State Audit – would only be granted with the consent from the audited organisations and individuals.

Similarly, auditors given the right to access and analyse data would be responsible for any breach, the Auditor General said.

Some deputies said they wanted the State Audit to have access to whatever records and data they need, regardless of the opinion of the audited organisations and individuals.

Deputies also expressed support for a new stipulation which allows audited organisations to file complaints against State Audit’s official results, with the Auditor General being the 'resolver' of complaints and recommendations.

“The current law gives the State Audit an 'overriding power' meaning their judgement takes effect as soon as it is issued, no questions asked. But, what if the audited organisation wants to protest or question the judgement, then where can they take their complaints to?” said deputy Lê Thanh Vân from Cà Mau Province’s delegation and a member of the NA’s Finance and Budget Committee.

“Therefore, an amendment is needed to protect the legitimate rights and benefits of the legal bodies that are subjected to auditing by the State Audit,” Vân said, adding that this is in line with the law on complaints and denunciation and the law on criminal procedures code. — VNS

The official website of the 13th National Congress of the Communist Party of Vietnam (CPV) was launched on October 3, at daihoi13.dangcongsan.vn.

The Vietnamese Government resolved to record GDP growth of 2.5-3 percent this year at its recent monthly meeting, Minister and Chairman of the Government Office Mai Tien Dung told a press conference on October 2.

Recovering and Building Back Better as a Region: ASEAN Chief
POLITICSicon  03/10/2020

Secretary-General of the Association of Southeast Asian Nations (ASEAN) Dato Lim Jock Hoi has written an article about the region’s COVID-19 and economic situation. The following is the full text of the article.

Vietnam wants code of conduct (COC) negotiations for parties in the East Sea between Southeast Asian nations and China to resume soon, after months of disruption caused by the COVID-19 pandemic, a spokesperson has said.

Vietnam supports joint efforts by the United Nations (UN) and the African Union (AU) to promote peace in Africa, Ambassador Pham Hai Anh, deputy head of the Vietnamese mission to the UN, has said.

With Vietnam celebrating the 44th anniversary of joining the UN this month, Caitlin Wiesen, UNDP resident representative in Vietnam, pores over the country's progress in human development and the challenges ahead to tackle various inequalities.

Cooperative relations between Vietnam and Germany have been developing constantly in multiple fields, German Ambassador to Vietnam Guido Hildner told the media on September 30.

Vietnam has called on Israel to cease the expansion of settlement areas and fulfill its duties in line with international law.