The Party Secretariat has removed former Deputy Minister of Transport Nguyen Hong Truong, 62, from the Party unit of the Transport Ministry over his serious violations in the equitization of some State-owned enterprises.

Chaired by Party Secretary General and State President Nguyen Phu Trong, the Secretariat held a meeting to consider disciplinary measures against the Party unit of the Transport Ministry and its member Nguyen Hong Truong.

According to the Party regulator, Truong must be responsible for the violations and shortcomings of the Party unit during his tenure as a deputy minister of transport and head of the Steering Committee for Enterprise Reform and Development under the ministry.

Truong is personally accountable for his decisions in approving the corporate value, equitization plans and State capital divestment of many enterprises under the management of the ministry.

He even suggested then-prime minister approve equitization plans beyond his mandate in violation of prevailing regulations.

Also, he allowed the Vietnam Airlines Corporation to carry out a number of activities against the 2013 Enterprise Law and other regulations of the Government.

Due to a lack of oversight, some businesses at which he took the helm were found to have committed mistakes, causing asset losses for the State.

His violations were severe, tarnishing the prestige of the Party unit of the ministry and himself, according to the Secretariat.

In addition to the disciplinary action from the Party, the Secretariat called for the competent authorities to take administrative sanctions against him.

Truong was a deputy minister of transport in ten years since 2007. Earlier, he served as a vice chairman of Nghe An Province, his hometown, in northern Vietnam. After his retirement, he was appointed to the president of the Vietnam Traffic Safety Association in late 2017.

Meanwhile, the ministry's Party unit got a warning from the Secretariat since it was found to have seriously violated the Party working regulations, have shown a lack of responsibility, as well as have not done right in its leadership, direction and inspections.

Earlier this month, the Inspection Commission of the Party Central Committee gave warnings and reprimands against some other current and former deputy ministers of transport for their wrongdoing in equitization and State capital divestment. SGT

Former Deputy PM Vu Van Ninh, 64, will be subject to disciplinary measures taken by the Politburo for his serious violations during the equitization of some State-owned enterprises under the Ministry of Transport.

Former Deputy PM Vu Van Ninh, 64, who was also former member of the Party Central Committee, was found to have committed violations and shortcomings in the equitization and State capital divestment at SOEs under the Transport Ministry. 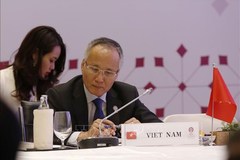