and the building of a clean and strong public security force, a modern army, and a civilised and modern judicial sector.

Delivering a speech at the 13th National Party Congress, Gen. To Lam, Politburo member, Secretary of the Central Public Security Party Committee, and Minister of Public Security, said that during the 2016-2021 tenure, the people’s public security force did a thorough job of understanding and forecasting the situation and presenting proposals to the Party and State to issue and steer the implementation of strategic, fundamental, and long-term guidelines, policies, and viewpoints about security - order protection and public security force building.

That helped create a peaceful and stable environment for socio-economic development, the expansion of external relations, and improvements to the country’s stature, he noted.

To successfully carry out the content on security - order protection in the 13th National Party Congress’s resolution, the Central Public Security Party Organisation and the entire public security force will thoroughly understand and seriously implement the Party’s guidelines and policies so as to press on with comprehensive reforms, he went on.

Lam emphasised that the force will keep a firm grasp of the situation quickly and from afar so as to provide timely advice to the Party and State on guidelines, solutions, mechanisms, policies, and laws to protect the national interest, sovereignty, and security; maintain strategic proactiveness; and strongly bring into play the people’s role in security affairs.

Speaking at the congress, Sen. Lt. Gen. Phan Van Giang, member of the Party Central Committee, member of the Standing Board of the Central Military Commission, Chief of the General Staff of the Vietnam People’s Army (VPA), and Deputy Minister of National Defence, said that during the last tenure, the VPA firmly maintained and upheld its nature and traditions as a heroic, united, proactive, and creative army that has exerted efforts to weather difficulties and challenges and comprehensively fulfil its duties, thereby helping to firmly safeguard independence and sovereignty and maintain a peaceful and stable environment for national development.

He emphasised improvements in awareness, responsibility, and action in the entire Party, the people, the army, and the policy system in army building, defence consolidation, and Fatherland safeguarding; along with the enhancement of the Party’s absolute leadership in every aspect, as well as the State’s concentrated and united management of the army and national defence.

Delegates from the VPA’s Party Organisation proposed that for 2021-2026, the Party should continue leading the army and relevant forces to improve the VPA’s capacity in forecasting and advising the Party and State on military and defence affairs to protect the Fatherland in the new context; identify overall, fundamental, and long-term guidelines and solutions to dispel any risk of conflict early and from afar and avoid being caught by surprise in all circumstances; and stay proactive and ready to effectively respond to non-traditional security challenges, according to Giang.

He also highlighted the need to promote the building of people-based defence; the association of people-based defence with people-based security; the combination of ensuring strong defence - security with economic affairs; the reform and improvement of military training, education, and science; the development of a self-reliant, resilient, modern, and dual-purpose defence industry; along with the promotion of substantive defence diplomacy in order to protect the country’s interests early on and from afar, and by peaceful means.

The Party should continue its absolute and direct leadership over the VPA in every respect; build a regular, elite, and gradually modern army; prioritise the modernisation of certain military services, arms, and forces to create a solid prerequisite for building a modern army from 2030; and build a politically strong army that has strong combatant capacity and is an absolutely faithful and trustworthy political and combat force of the Party, State, and people, Giang added.

In his speech, Vice Secretary of the Party Committee and Standing Deputy Chief Justice of the Supreme People’s Court, Le Hong Quang, underlined that building a strong and prosperous nation in association with a civilised and modern judicial sector is an important part of “Doi Moi” (Renewal).

Proposals include perfecting regulations; upholding democracy; protecting people’s rights and legitimate interests via the completion of the people’s assessor institution; completing the mechanism for monitoring judicial activities for people-elected agencies and the people; making use of IT development to build smart and e-courts; and placing emphasis on the position and role of the agencies exercising judicial power in the political system./. VNA

Vietnam and UNSC: From participant to partner for sustainable peace
POLITICSicon  12/04/2021

Vietnam for the second time assumed the role of rotating President of the United Nations Security Council (UNSC) for the 2020-2021 tenure this month,

State President Nguyen Xuan Phuc on April 10 sent a message of condolences to Queen Elizabeth II of the United Kingdom of Great Britain and Northern Ireland over the death of her husband Prince Philip, the Duke of Edinburgh.

State President Nguyen Xuan Phuc lauded the central city of Da Nang and the neighbouring province of Quang Nam for their achievements over the past years during a working session with their leaders on April 10.

Member of Party Central Committee Hau A Lenh was elected as Minister-Chairman of Committee for Ethnic Minorities Affairs at the 11th sitting of the 14th legislature on April 8, 2021.

Party Central Committee Nguyen Van Hung was elected Minister of Culture, Sports and Tourism at the 11th session of the 14th National Assembly on April 8, 2021.

Vice Chairman of the Party Central Committee’s Popularisation and Education Commission Nguyen Hong Dien was appointed Minister of Industry and Trade at the 11th sitting of the 14th legislature on April 8. 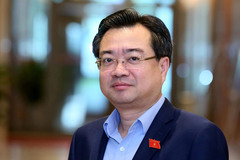