Sovereignty over cyberspace an important part of national sovereignty: official

Speaking at the national scientific conference on "Ensuring national sovereignty in cyberspace" on Wednesday, Nghia said that the strong development of science and technology, especially the fourth industrial revolution, had created a new strategic space called cyberspace.

Cyberspace has become a key and indispensable part of the implementation of strategies on foreign relations, consolidation and maintenance of the socio-economic activities of countries.

The benefits of cyberspace made important contributions to innovation in thinking and development in all fields, he said.

However, cyberspace was also an environment that was easily exploited by hostile and reactionary forces on a wide scale, extent and audience that was difficult to control, Nghia said.

He said along with the whole political system, the police have always been the core force protecting the Party and people, ensuring social order and safety. They also play an important role in ensuring national sovereignty in cyberspace.

Assoc. Prof. Dr. Pham Minh Tuan, Director and Editor-in-Chief of the National Political Publishing House, said that the issue of national sovereignty in cyberspace was new in Vietnam, posing many challenges in leading, directing and managing the country.

That was also the subject of many research studies and scientific conferences at different levels, of many branches and fields, especially of the police sector.

Associate Professor, Dr Nguyen Van Thanh, special Vice Chairman of the Central Theoretical Council, former Deputy Minister of Public Security, said that national sovereignty in cyberspace is a supreme, absolute and complete right. The State manages and controls it directly or indirectly through policies, laws and technological capabilities in accordance with international laws and regulations.

To improve the effectiveness of state management of cyber security and national cyber information, it was necessary to build a healthy cyber environment and a specialised force that can proactively respond to cyber threats, Thanh said.

“Particularly, it is important to perfect and improve the capacity for agencies, departments, branches and localities to ensure cyber security and information safety,” he said.

Minister of Public Security To Lam said that according to the International Criminal Police Organisation, IT crimes ranked second in the most dangerous types of crimes, after terrorist crimes.

Up to 90 per cent of traditional criminals have moved to a network environment or use high-tech devices. Therefore, the issue of developing and mastering cyberspace security has become one of the urgent tasks to which many countries pay special attention, Lam said.

Meanwhile, Vietnam was not fully autonomous in terms of technology as many companies that provide user services or operate technology for Vietnam were managed by foreigners, Lam said, warning over potential risks to the country's information security.

He also asked for improved capacity of IT human resources and tightened co-operation with other countries, universities, advanced technology corporations in the world to learn new technologies and experiences.

The Ministry of Public Security coordinated with the National Political Publishing House to organise the online national conference with more than 2,000 participants across the country.

They also assessed the results, experiences as well as limitations, inadequacies and causes of limitations and updates in cyberspace activities.

Cyber security is now a concern for everyone, said Deputy Minister of Information and Communications Nguyen Huy Dung at the Vietnam Security Summit 2021.

Code of conduct on child protection in cyberspace to be issued 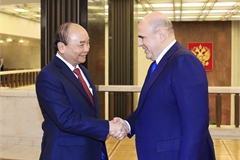