This is partly attributable to how the National Assembly set development targets from the outset, which were practical and based on the global and domestic contexts.

The Government surpassed all 12 targets in 2018 and 2019 set by the National Assembly. Given the heavy impact of the COVID-19 pandemic coupled with natural disasters in 2020, the legislature then adjusted its development targets, which helped the Government end a turbulent year with 8 out of 12 targets being met and a growth rate of 2.9%, among the highest in the world.

The 14th National Assembly carefully listened to opinions from the people and businesses and integrated them into legal documents.

Under the monitoring of the National Assembly, the Government has done its best to develop the market economy with a socialist orientation, adopt administrative reform promptly, and improve the business climate and the country’s competitiveness.

The previous tenure was a success, showing consensus between the Government and people in monitoring and implementing the targets set by the National Assembly.

It also shows how the National Assembly is flexible in setting out appropriate targets amid the current challenges.

Its work greatly contributed to the success of the socio-economic development plan from 2016-2020, and created a firm foundation for the country to continue to sustainably develop in the years to come./. VNA 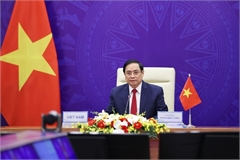