A delegation of the Vietnamese Ministry of Public Security, headed by Deputy Minister Sen. Lieut. Gen. Nguyen Van Thanh, are attending the 88th INTERPOL General Assembly in Santiago, Chile from October 15 to 18. 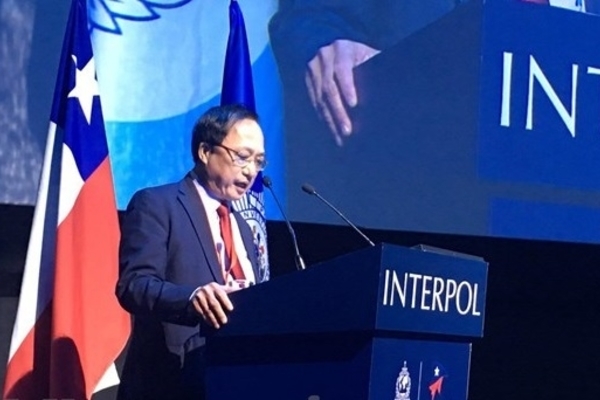 The meeting gathers the participation of more than 900 delegates from 162 INTERPOL member countries and some observer organisations and private partners of INTERPOL.

In his opening remark, INTERPOL President INTERPOL Kim Jong-yang expressed his appreciation for the cooperation between police agencies of countries around the world in the fight against crime and global security threats, hailing the event as an opportunity for nations to share their crime prevention experiences for a safer and better world.

The INTERPOL General Assembly discussed and adopted 12 Resolutions and two reports related to policies, resources, coordination methods, financial issues and specific programmes and activities aiming to enhance cooperation between law enforcement forces of member states. Delegates also voted for the new INTERPOL Secretary General for the 2019-2024 term, as well as the permanent leaders of the global police body.

In the framework of the meeting, Sen. Lieut. Gen. Nguyen Van Thanh delivered a speech on ASEANPOL’s operations and the outcomes of the 39th ASEANPOL Conference hosted by Vietnam in Hanoi last month. On behalf of the INTERPOL General Secretariat, the Vietnamese official elaborated on the results of the third INTERPOL Dialogue on an effective multilateral policing architecture against global threats.

According to Thanh, in addition to the achievements, Vietnam’s police forces face a lot of difficulties and challenges, especially in fighting high-tech crime. He emphasised that, in order to effectively deal with this type of crime, the law enforcement forces of member countries must accelerate coordination and the sharing of relevant information and situations. Vietnam is willing to strengthen cooperation with countries, territories and international organisations on the basis of international law and practice, he said.

Thanh asked countries to support Vietnam to ensure absolute security and safety for the important international events, to be held in Vietnam in the time ahead, especially when Vietnam assumes the role as a non-permanent member of the United Nations Security Council for 2020-2021 and the Chair of ASEAN in 2020.

During his stay in Chile, Deputy Minister Nguyen Van Thanh had bilateral talks with INTERPOL President Kim Jong-yang and INTERPOL Secretary General Jurgen Stock, during which the two sides reviewed cooperation in the fields of providing training for Vietnamese law enforcement agencies and searching for globally wanted criminals, while discussing cooperation orientations in the time ahead.

At least 20 Indian soldiers died in the worst border incident in decades between the two countries.

Vietnam should announce “the end” of the COVID-19 pandemic in the country and “develop a roadmap to gradually resume trade relations with 17 partners,” HCM City Party Committee secretary Nguyen Thien Nhan has said.

Vietnamese forces engaged in UN peacekeeping missions in the Central African Republic and South Sudan reported on the COVID-19 situation in their areas via a video conference in Hanoi on Monday.