Welcoming Minister Tehan and the Australian delegation to visit Vietnam, the President said he believes the visit will contribute to strengthening the Vietnam-Australia partnership with economic-trade cooperation as the core.

He noted that both Vietnam and Australia are among each other’s group of 11 largest trade partners, and Australia is the 19th biggest FDI investor among 132 countries and territories investing in Vietnam with 526 projects worth nearly 1.92 billion USD (as of June 2021). He proposed that the two sides further promote bilateral collaboration by removing obstacles facing their businesses.

As active members of the Comprehensive and Progressive Agreement for Trans-Pacific Partnership (CPTPP), which took effect in 2018, and the Regional Comprehensive Economic Partnership (RCEP), which is expected to take effect soon, Vietnam and Australia are eying new cooperation motivations that are hoped to benefit business communities and people of both countries, he said.

For his part, Minister Tehan affirmed that he will do his utmost to continue connecting cooperation plans between the two sides.
He spoke of Vietnam’s achievements in implementing the dual targets, and said that the pandemic will continue to cause many challenges. The two countries should strengthen cooperation and mutual support in the time to come, he said.

On the occasion, President Nguyen Xuan Phuc extended his best regards to Australian Prime Minister Scott Morison. He expressed his belief that after the visit, the Vietnam-Australia partnership in all fields, especially in trade, will be further developed.

Deputy Prime Minister Pham Binh Minh wished that Vietnam will become one of Australia’s ten largest trade partners and vice versa at a reception for visiting Australian Minister of Trade, Tourism and Investment Dan Tehan in Hanoi on July 13.

Welcoming Tehan, Minh spoke highly of Australia’s response to COVID-19 and its adaptation to the “new normal,” resulting in economic recovery and heightened position at the international stage.

He cited that two-way trade rocketed by more than 40 percent year on year in the first half of 2021.

Given that both countries are signatories to the Comprehensive and Progressive Agreement for Trans-Pacific Partnership (CPTPP) and the Regional Comprehensive Economic Partnership (RCEP), he hoped that Vietnam and Australia will be among ten largest trade partners of each other.

The Deputy PM suggested Australia give Vietnamese shrimp balls and passion fruit access to its market while showing Vietnam’s interest in importing ore, coal, iron and steel, and rare earth from the country.

He also appreciated Australia’s role in the Asia-Pacific region and its stance in maintaining the regional peace, security and stability, particularly in the East Sea, in line with international law and the UN Convention on the Law of the Sea (UNCLOS) 1982.

He moved on to thank the Government of Australia for supporting Vietnam in its roles as ASEAN Chair 2020 and a non-permanent member of the UN Security Council and pledging to provide the Southeast Asian nation with 40 million AUD (29.9 million USD) and 1.5 million doses of COVID-19 vaccine Astra Zeneca to aid its COVID-19 fight. He hoped for Australia’s continued support for COVAX vaccine-sharing facility and for poor and developing countries to access COVID-19 vaccine supply.

Also pleased to see the growing bilateral ties, Minister Tehan said Australia is committed to cooperating with Vietnam in tackling challenges from the pandemic.

He asked the Government of Vietnam to back the Australia-Vietnam Enhanced Economic Engagement Strategy (EEES) and continue fostering the bilateral trade and investment relations, with the focus placed on food security, water resources and high technology.

Tehan is on his first visit to Vietnam, one of the destinations during his two-week tour of five countries, also including Singapore, the Republic of Korea, Japan and the US. These are Australia’s important partners, accounting for around one fourth of its goods and service export turnover./. 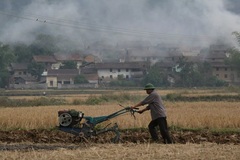