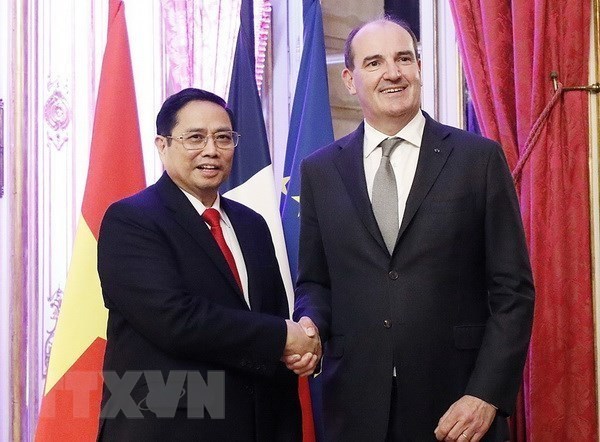 According to a Vietnam – France joint statement issued on the occasion of the Vietnamese PM’s official visit to France from November 3-5, during their talks, both leaders welcomed the long-standing and sustainable ties between the two countries.

Towards the 50th founding anniversary of diplomatic ties in 2023, they agreed to enhance high-level conversations and meetings, and make efforts in the new period in various areas, including satellite and hi-tech projects of strategic significance to lift their relationship.

The Vietnamese side spoke highly of France and the European Union’s role in the Indo-Pacific, as well as their strategies that affirm their attention to the region.

Vietnam and France shared similar stances on major issues in the region and the world, including security, health care and sustainable development. In France and Europe’s strategies on the Indo-Pacific, Vietnam and other ASEAN member states play a crucial role.

The two leaders adopted a statement with seven points that aimed to further deepen the bilateral strategic partnership and confront with global challenges.

They affirmed solidarity in the fight against the COVID-19 pandemic, highlighting that Vietnam donated a large number of masks to France in 2020 and France granted 2 million vaccine doses to Vietnam this year.

Reaffirming their wish to bolster cooperation amid common challenges, they underscored the important role of multilateralism in which the United Nations plays a central role. They also reaffirmed their adherence to the UN Charter, especially the importance of promoting and protecting human rights and basic rights to the development of each nation.

On the occasion of the 26th UN Climate Change Conference of the Parties (COP26), the two sides affirmed the desire to enhance cooperation and determination to promote sustainable growth in the spirit of the 2030 UN Agenda on Sustainable Development.

As the two nations are celebrating the 30th anniversary of bilateral defence ties, the two sides reaffirmed the resolve to create a new driving force for the relationship by carrying out several projects to increase mutual trust. They welcomed exchanges within the framework of Vietnam-France strategic dialogue and defence cooperation.

They advocated continuing with the training of officers in France in French language, with the aim of deploying them to UN peacekeeping missions in French-speaking areas.

They reaffirmed full respect for the 1982 United Nations Convention on the Law of the Sea (UNCLOS), as well as peaceful settlement of disputes, refraining from acts that use or threat to use force. They affirmed the importance of maintaining safety and freedom of navigation and aviation in all seas and oceans, especially in the East Sea, on the basis of abiding by principles of international law.

The two sides welcomed ASEAN’s central role in supporting dialogue, cooperation and international law. They expressed support for ASEAN and China’s efforts to fully and effectively implement the Declaration on the Conduct of Parties in the East Sea (DOC), and soon reach an effective and practical Code of Conduct (COC) in the East Sea in line with international law, particularly the 1982 UNCLOS.

France commended Vietnam for successfully assuming its role as non-permanent member of the UN Security Council for the 2020-2021 tenure and congratulated close coordination between the two nations during the tenure.

Amid the COVID-19 pandemic, they reiterated their determination to boost economic, trade and investment ties to support economic recovery. In such spirit, they will hold a high-level economic dialogue in January 2022 if conditions allow.

They emphasised the importance of full and rapid implementation of the EU-Vietnam Free Trade Agreement (EVFTA) that took effect in August 2020.

On urban transport, they spotlighted the significance of Hanoi's metro line No.3 project using France’s loan worth over 500 million EUR. They promised to put the metro's elevated section into operation between now and late 2022.

In space field, Vietnam and France want to continue partnering together in satellite and use of satellite images in agriculture, hydrometeorology, climate change response and disaster risk prevention.

The two nations consider locality-to-locality cooperation as a pillar in bilateral ties. The next meeting on cooperation between Vietnamese and French localities in Hanoi in late 2022 will mark a new milestone in signing new partnership agreements.