Vietnam and Indonesia have agreed to continue close coordination as non-permanent members of the United Nations Security Council for the 2020-2021 tenure. 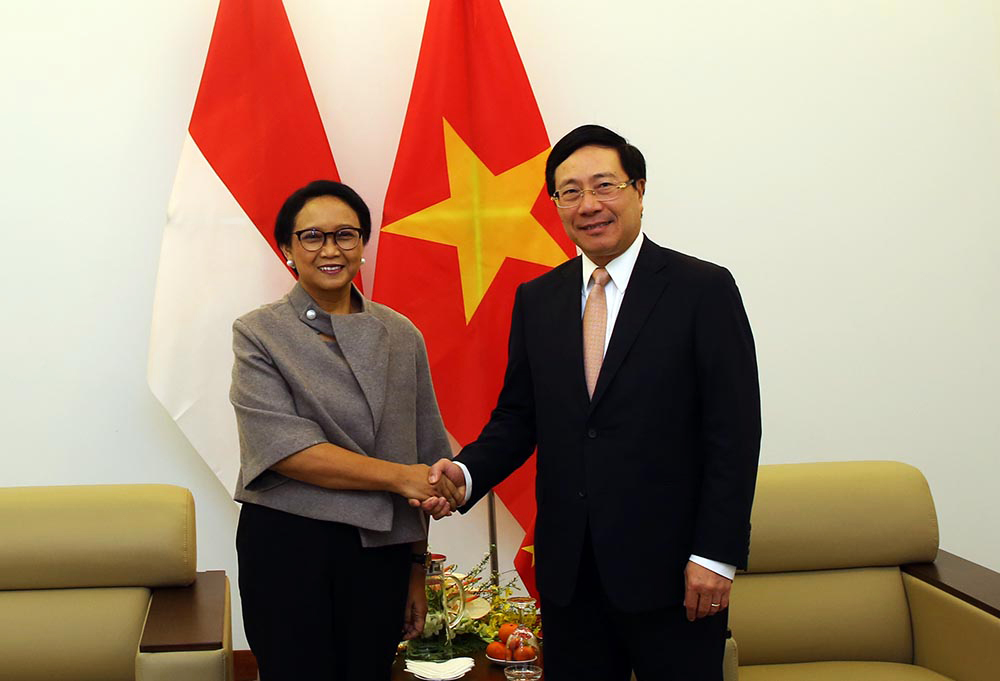 Meanwhile, Minh extended congratulation to Marsudi upon her reappointment as Foreign Minister of Indonesia for 2019-2024 tenure, expressing his belief that the Indonesian Government will successfully realize its Vision 2045 to become one of the world’s top economies and fully eradicate poverty by the 100th anniversary of Indonesia’s independence.

Both sides noted with pleasure that the strategic partnership between Viet Nam and Indonesia has grown vigorously during the past years in an increasingly effective and extensive manner.

Particularly, the two-way trade volume was estimated at US$ 9.6 billion this year and is likely to reach the sides’ goal of US$ 10 billion soon.

The pair agreed to step up bilateral ties across all fields and work together to organize events marking the 65th founding anniversary of the two countries’ diplomatic relations in 2020.

They vowed to accelerate the deployment of the action plan on implementation of the Viet Nam-Indonesia strategic partnership for 2019-2023 period.

Both sides agreed that their bilateral cooperation is of significant importance not only for the two countries but also for peace and stability in the region as well as ASEAN centrality.

Regarding the East Sea issue, the two sides expressed their concerns over recent developments there, especially activities violating the legitimate interests of littoral countries and disrupting normal economic operations.

Both sides said such violations caused serious impacts on peace, stability and security in the region, were contrary to the spirit of the Declaration on the Conduct of Parties in the East Sea (DOC).

The two sides agreed that Viet Nam and Indonesia as well as other ASEAN countries need to coordinate in maintaining the bloc’s common position, voice and centrality in order to uphold a rule-based order and respect for international law, including the 1982 United Nations Convention on the Law of the Sea (UNCLOS).

Marsudi pledged to fully support Viet Nam’s ASEAN Chairmanship and spoke highly of the country’s initiative to organize open discussions on the 75th anniversary of the United Nations Charter. VGP

General Secretary of the Lao People’s Revolutionary Party (LPRP) Central Committee and President of Laos Thongloun Sisoulith arrived in Hanoi on Sunday and signed various agreements with his Vietnamese counterpart.

The codes of conduct previously released by other ministries and local authorities do not include detailed requirements on dressing at work or a ban on wearing jeans that was recently issued the Ministry of Home Affairs (MHA).

General Secretary of the Lao People’s Revolutionary Party (LPRP) Central Committee and President of Laos Thongloun Sisoulith, his spouse and a Lao Party and State high-level delegation were welcomed to Vietnam

Prime Minister Pham Minh Chinh has ordered the establishment of a task force in charge of assisting the study, transfer and production of made-in-Vietnam vaccines to boost local vaccine manufacturing.

The US Department of State released last month its 2020 International Religious Freedom Report which stated that some religious groups in Vietnam are not recognized by the State and are bothered, intervened, or restricted by local authorities.