Vietnam hoped that the International Monetary Fund (IMF) will continue cooperating closely with the country and provide it with more assistance, training and policy consultancy, a senior Party official has said. 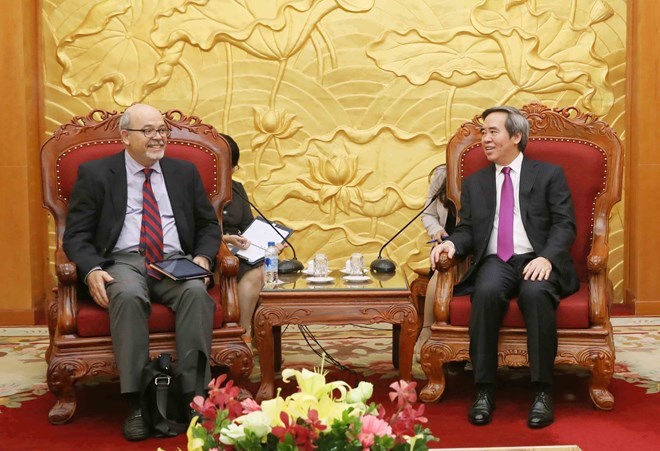 Nguyen Van Binh, Politburo member and Chairman of the Communist Party of Vietnam Central Committee’s Economic Commission, made the statement during a reception in Hanoi on April 18 for an IMF delegation led by Alex Mourmouras, who is division chief in the IMF’s Asia and Pacific Department where he has served as mission chief for Vietnam, Singapore and Malaysia.

While acknowledging the outcomes of earlier working sessions between the IMF delegation and relevant ministries and agencies of Vietnam, Binh spoke highly of the effective and practical cooperation between Vietnam and the IMF in the recent past, especially in banking-finance policy consultancy.

Mourmouras briefed his host on the results of working sessions between the IMF delegation and relevant ministries and agencies of Vietnam.

He expressed his delight at Vietnam’s economic achievements in 2018 and the first months of 2019, saying the country has reaped steady growth in almost all spheres while its position has been strengthened on the international arena despite uncertainties, risks and trade disputes in the world.

The IMF official commended the Vietnamese Party and State’s policy on stabilising macro-economy and renewing growth model, especially the nation’s priorities and socio-economic targets for the coming time.

The IMF will continue to cooperate with and assist Vietnam in the development process, he promised.-VNA

Cooperative relations between Vietnam and Germany have been developing constantly in multiple fields, German Ambassador to Vietnam Guido Hildner told the media on September 30.

Vietnam has called on Israel to cease the expansion of settlement areas and fulfill its duties in line with international law.

Ambassador Le Thi Tuyet Mai, head of the Permanent Mission of Vietnam to the UN, WTO and other international organisations in Geneva,