Vietnam will always adhere to principles and goals of the Non-Aligned Movement (NAM), and is willing to join hands with other member countries to foster intra-bloc solidarity and cope with challenges facing the movement. 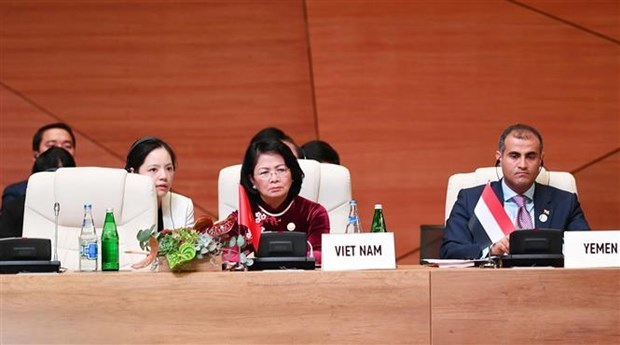 Vice President Dang Thi NgocThinh made the statement at the 18th NAM Summit in Baku, Azerbaijan,on October 25, which drew the participation of representatives from 120 NAMmember countries, observers and international organisations.

Thinh noted that the movement is facinggreat challenges from both inside and outside factors, including competitionamong world powers, unilateralism and power politics, as well as membercountries’ limitations in resources, increasing differences in interests andinterference from the outside.

The Vice President called for theNAM member countries to enhance solidarity on the foundation of the Principlesof Bandung, thus maintaining the movement’s role as a pioneer in promotingrespect for law, democratising international relations and preservinglegitimate interests of the member countries.

She held that the Association ofSoutheast Asian Nations (ASEAN) is confronting serious threats from complicateddevelopments in the East Sea, especially violations of sovereign rights andjurisdiction rights in the territorial waters of Vietnam as defined in the 1982United Nations Convention on the Law of the Sea (UNCLOS).

Thinh proposed that the NAM giveadequate attention to and support efforts for peace, security and stability inSoutheast Asia, while respecting the viewpoints and stands of relevant member states.

Vietnam will heighten the senseof responsibility to make contributions to global peace as well as sustainabledevelopment, happiness and prosperity of the humankind, she stressed.

The NAM was set up in 1961,grouping 120 members and 17 observer countries, and become an organisation withthe second highest number of members only after the United Nations. Vietnamjoined the movement in 1976.

The same day, on the sidelines ofthe summit, Vice President Dang Thi Ngoc Thinh had a meeting with her Indiancounterpart Muppavarapu Venkaiah Naidu, during which she expressed her delightat the strong development of Vietnam-India traditional ties, especially since thetwo nations elevated the relations to the level of comprehensive strategicpartnership in September 2016.

She suggested that both sideswork closely together toward the goal of 15 billion USD in two-way trade in2020.

The Vietnamese Vice Presidentwelcomed Indi Go’s opening of the first direct air route between the twocountries, connecting Kolkata and Hanoi from October 3, and hoped that moresuch routes will be launched soon.

She also welcomed Indianinvestors to Vietnam, especially in the fields where Vietnam has demand andIndia has strength such as renewable energy, infrastructure, high qualityagriculture, and oil and gas.

Thinh proposed the two countriesfoster cooperation and coordination at multilateral forums, especially the UN,NAM, and mechanisms within the ASEAN-India partnership.

For his part, Naidu recalled hisgood memories of his visit to Vietnam in May this year to attend the UN VesakDay, showing his impression at the country’s socio-economic achievements aswell as its role in the region, especially as the ASEAN Chair in 2020 and anon-permanent member of the UN Security Council in the 2020-2021 tenure.

Regarding the East Sea issue, Naiduconfirmed India’s support to the stance of Vietnam and the ASEAN in maintainingpeace and stability, and ensuring security, safety andfreedom of navigation and aviation in the East Sea, as well as the settlementof disputes through peaceful measures in line with international law, includingthe UNCLOS 1982./.VNA