In 2015, the Tra Nam commune authorities displayed bamboo sections at the Nam Tra My district’s cultural house on the occasion of the Ngoc Linh Ginseng Festival. 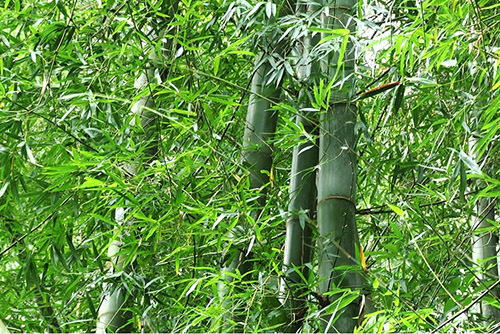 The ‘super bamboo’ surprised visitors, who were seeing the special bamboo for the first time. They were busy taking pictures with the bamboo, forgetting about the stalls of precious Ngoc Linh ginseng, the major subject of the festival.

Ho Van Thuan, chair of Tra Nam commune, said there are many bamboo species on Ngoc Linh Mount, but the gigantic bamboo only exists in his locality.

Three years later, one of the guests at the festival returned to the area. He was led to Ngok Cung mountain and saw gigantic bamboo after hours of climbing the mountain.

There were many bushes of bamboo In the middle of the mountain, about 300 bamboo trees in each bush. The trees were straight, about 25 meters tall and had very long sections, about 60 centimeters each. In the middle of bamboo bushes, bamboo shoots were bright red, not yellow as expected.

The village patriarch Thach affirmed that the gigantic bamboo exists only on Ngok Cung. Villagers once tried to look for bamboo on Ngoc Linh Range, but could not find any like it.

Long Rieu Villagers believe that the gigantic bamboo is a gift from god and they vowed to protect the bamboo. Some men in the village tried to bring bamboo to the village to grow there, but the trees could not survive.

“Ca Dong people in Long Rieu Hamlet cut several bamboo trees and cut this into small sections to make things for daily use,” he said.

“One bamboo tree is enough for the entire village. The things made of bamboo are very durable, so we only fell one tree every several years,” he said.

Even Thach doesn’t know when the gigantic bamboo first appeared in the village. Ca Dong people tell young people that the bamboo is very precious and villagers must protect it with all their hearts.

“The bamboo forest has existed for a long time because Ca Dong people love and protect it at any cost,” he said. “All people have to ask for a village patriarch’s permission to cut bamboo trees when necessary.”

The story of Bong, the bamboo fish built to protect Danang’s beach from plastic waste.

Thai women in Vietnam’s northwest region always wear shoulder bamboo baskets when they work in terraced fields or go to the forest to pick vegetables and fruit.