Prestigious hospitals in HCM City have made a breakthrough using AI in medicine, which lays a solid foundation for HCM City to become the region’s intensive medical center. 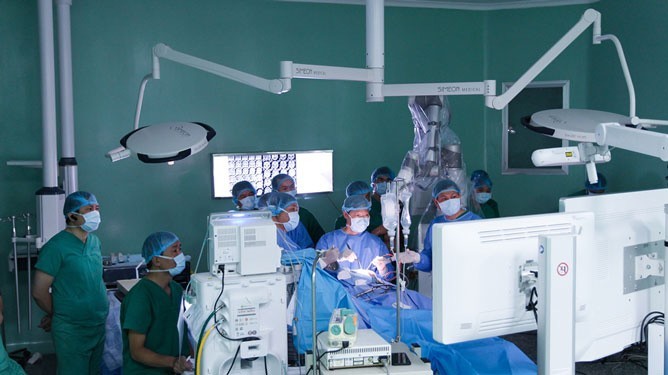 These include two collective records: the first hospital in Vietnam that performed brain tumor surgery (on a 67-year-old patient) with Modus V Synaptive robotic AI technology system; and the first hospital meeting the gold treatment quality standard granted by the the European Stroke Association for stroke treatment.

The success of the brain tumor surgery with robotic systems is an important milestone on the global medicine map.

People's Hospital 115 is the first medical facility in Asia deploying a robot system for neuroscience and brain surgery. The patient undergoing surgery was a 67-year-old woman from Trang Bang district of Tay Ninh province), hospitalized with headache, difficulty in speaking, and weak limbs.

Doctors found a brain tumor, very small and single, which affected motor function. As conventional surgeries may leave many neurological after-effects to the patient, doctors decided to carry out the operation with a robot to remove tumors and avoid damage to the brain.

With the support of the positioning system and robot and Pro. Amin Kassam, the surgical team of the hospital, comprising three members - Chu Tan Si, Luu Kinh Khuong and Nguyen Van Tuan -- successfully removed the tumor from the patient's brain without causing damage to the adjacent brain structure.

The operation lasted only one hour and 30 minutes, or 2 hours shorter than an operation with classic microsurgical glasses, which takes four hours on average.

Just two hours after the surgery, the patient regained consciousness and is in stable condition.

This is the first successful operation of this kind carried out in Asia.

According to Dr Phan Van Bau, director of the People's Hospital 115, the Neurosurgery Department implemented 2,400 surgeries a year. To date, the hospital has successfully carried out 20 surgery cases with robot system, including four cases of brain hemorrhage.

The Modus V Synaptive robot system is safe and effective, with no after-surgery complications reported so far. Patients have better postoperative lives as important nerve functions can be preserved.

A team of surgeons from private Da Nang-Hoan My Hospital have successfully operated on a three-year-old with congenital heart disease – the second surgery after the first emergency operation in 2018.

A series of complications due to plastic surgery have raised concerns about safety, while doctors have warned women to be careful in undergoing such procedures.