In late 201, the European Physics Society (EPS) published a report entitled “The importance of physics to the economies of Europe”. 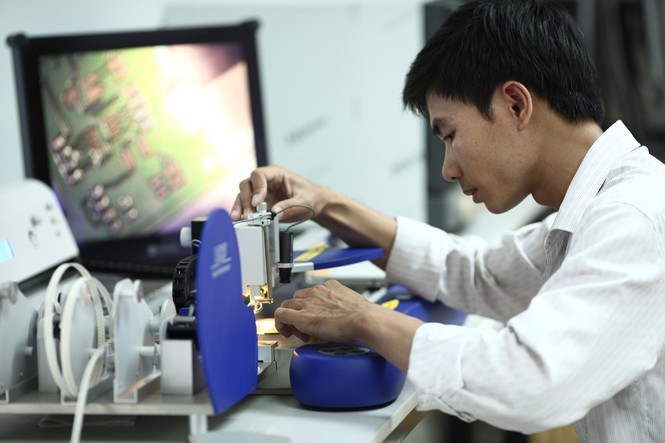 The report showed that in 2011-2016, the gross value added (GVA) of physics-based industries exceeded 1.45 trillion euros a year, or 12 percent of Europe’s GVA. This means that the contribution by physics to economic development is higher than finance services (5.3 percent) and retail (4.5 percent).

Prof Tran Xuan Hoai from the Institute of Applied Physics and Scientific Equipment, an arm of the Vietnam Academy of Science and Technology, cited the report to prove the important role of physics to the economy.

He stressed that the achievements mentioned in the report will also be the prospect of Vietnam’s physics, if the process from research to innovation can be completed. In other words, this is the process of converting knowledge into money.

However, he commented that Vietnamese scientists can ‘convert money into knowledge’, but find it difficult to convert knowledge into money.

Dr Pham Hong Duong from the Institute of Material Sciences in 1990-2000 created
a computerized gold test scale, fabricated small-capacity He-Ne lasers to support wound treatment, and created painting and photo technology and 3D cinema equipment. However, most of the inventions failed because of the lack of connection with enterprises so as to obtain more optimal products and avoid unhealthy competition.

Hoai, an applied physicist, invented a scanning probe microscopy, but it could not be commercialized because the market was not ready at that moment.

More recently, a young physicist from the Vietnam Academy of Science and Technology created a module that can be attached to existing street light bulbs and turned them into LED light bulbs that are both cost-effective and environmentally friendly.

The invention was the result of a project funded by the Hanoi Science and Technology Department.

However, his solution has not been applied because people prefer to buy new lamps rather than use this technology solution.

In most cases, technological solutions cannot be applied in reality.

This, according to analysts, is attributed to the lack of a startup ecosystem. Nguyen Ai Viet from Hanoi National University, said there is no investment fund in Vietnam which accept high risks and provides venture funds to technological ideas.

Meanwhile, Hoai pointed out that the domestic market is not large enough and there is not enough capital, equipment and experience, while the labor force and products still cannot meet short- and long-term demands.