Old-generation refurbished iPods have been imported into Vietnam in large quantities.

Vo Linh in district 1, HCMC, has bought an iPod Nano of the first generation at VND450,000. 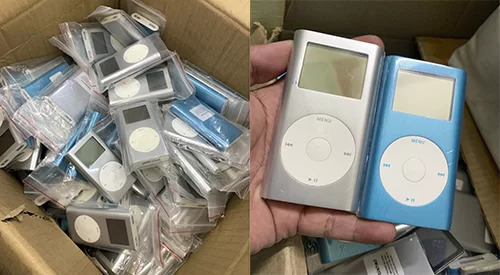 “I once had a similar product, but I lost it just after several months of use. The products have only appeared again recently. I bought one to listen to music,” Linh said.

“I need an iPod to play music when I do physical exercises in the morning,” she explained.

When asked if the machine works well, she said she is not sure about the quality of the product, but she still decided to buy it because it is cheap, just VND250,000.

Ads about old-generation iPods have appeared on many websites since early July.

The products available are mostly the old ones, including iPod Mini 2004, iPod Shuffle 2005 and iPod Nano 2004 (first, second and third generations). They are advertised as refurbished by Apple and the quality is guaranteed with 1-3-month warranty.

The owners of some private shops try to reassure customers that the iPods were really made by Apple and the manufacturer has just cleared stocks.

Shuffle is sold for VND250,000, while the Mini 4GB version is VND400,000. Meanwhile, iPod Nanos are priced at VND450,000-550,000. Sellers affirmed that the prices would be ‘negotiable’ if someone buys in large quantities. A seller whom reporters contacted said he could provide hundreds of iPods.

Not only available online, the old iPods are also displayed at junk shops which specialize in selling Apple products.

A seller on Phan Van Han street in Binh Thanh district in HCMC revealed that he can sell 5-10 iPods of this kind, both via online and his physical shop.

“The demand is relatively high from students and old people, who have basic needs for listening to music,” he said.

The iPods are sold in the form of bare machines, without box, covered with a plastic layer. On the back of products, one can see a stamp with the word ‘refurbished’.

The quality of these products is doubtful because of the non-seamless design, and some products have dirty plug ports. The words engraved on aluminum body are very sketchy, translucent, with many details different from the real machine produced by Apple.

Linh said he cannot have the same experience with the newly bought iPod as he once had with the real iPod he bought many years ago.

A businessman who once traded Apple’s devices told Zing that these products are from China. They were imported to Vietnam after the replacement of the cover and accessories, and sold as refurbished products.

“They are electronic waste,” he said.